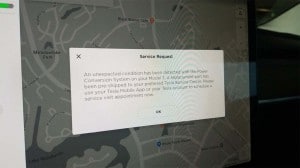 Tesla is now making it possible for its vehicles to self-diagnose some problems with its vehicles, eliminating some maintenance headaches before they happen.

It’s the sort of headache every motorist dreads: a problem that crops up unexpectedly, leaving them stranded on the side of the road.

But Tesla thinks it may be able to prevent at least some of those sudden breakdowns from occurring by introducing a new feature to its vehicles that not only can diagnose problems, but also, in some cases, send an alert to a the Tesla Service Center to pre-order the necessary repair parts.

“Our cars can keep tabs on certain components to let you know if they need replacing and order parts ahead of you next service visit,” the company said this week.

Tesla was the first automaker to allow its vehicles to use over-the-air updates, or OTA, much like smartphones are typically capable of. It has launched several software updates in recent days to make that even easier.

These OTA updates have been used in a number of different ways. During several natural disasters in the last several years, Tesla used the technology to temporarily extend the range of some models like owners could travel more easily out of harm’s way. Just last month, the company permanently updated the range and performance of some of its vehicles, one version of the Model S sedan now capable of traveling up to 370 miles on a charge. 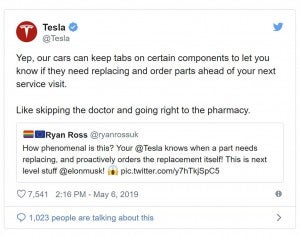 Tesla is making the maintenance of its vehicles simpler than ever with its new capabilities.

But the latest move focuses on service and reliability, something Musk described as “our number one priority” during a conference call to discuss Tesla’s earnings with analysts and the media.

It won’t always be possible to detect and address a problem before one of its vehicles breaks down, the automaker acknowledged, so among the new features it downloaded will be something called “Live issue detection (which will) automatically call a tow truck and loaner vehicle before the vehicle even come to a stop.”

If the software detects a problem before a vehicle actually breaks down it will put a “Service Request” on the big touchscreen on the instrument panel of every Tesla noting, “An unexpected condition has been detected with the Power Conversion System on your Model 3. A replacement part has been pre-shipped to your preferred Tesla Service Center. Please use your Tesla Mobile App or your Tesla account to schedule a service visit appointment now.”

Motorists will be able to cancel out if they feel repairs are not necessary, or can be delayed.

Tesla isn’t the only automaker working on the concept of self-diagnosis. A wide range of vehicles already can track when motorists need to go in for service or an oil change. But it appears the new feature integrated into Tesla products takes things to the next level.

Whether other automakers will follow suit remains to be seen, but there is a general push to add OTA capabilities across the board as more and more vehicle functions become software operated. It s likely to become an industry norm, rather than the exception, analysts predict, within the next few years.