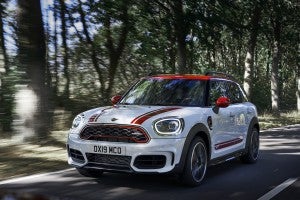 For 2019, the Mini John Cooper Works Countryman gets its most powerful engine yet: a 301-horsepower turbocharged four cylinder.

Mini keeps adding more fun to its small, but mighty, line-up through its John Cooper Works specialty brand. The company’s newly updated JCW Clubman and JCW Countryman are the most powerful Mini’s unleashed in 60 years.

The two new entries are powered by a new turbocharged four-cylinder engine putting out 301 horsepower.

The new powerful engine is mated as standard with a new 8-speed Steptronic sports transmission, including mechanical differential lock on the front axle, an ALL4 all-wheel drive system, a specifically engineered chassis, and additional reinforcement modifications for the body structure, engine connection and chassis fastenings, the company notes.

This enables the John Cooper Works racing sensation to attain a completely new dimension of performance and the new TwinPower Turbo technology surpasses that of the previous drive by as much as 73 hp.

(Mini shows off battery-electric concept at Goodwood. Click Here for the story.)

Torque in the new models jumps from 258 foot-pounds to 331 ft-lb, which translates to much more impressive acceleration. The new John Cooper Works Clubman sprints from 0 to 62 mph in 4.9 seconds, while the John Cooper Works Countryman does it in 5.1 seconds – 1.4 and 1.5 seconds faster than in the respective previous models.

The handling gets an equally impressive update with ALL4 becoming standard equipment on both new models.

The ALL4 all-wheel drive system plays a central role in optimizing the cars’ traction, agility and driving stability; it is part of the standard equipment of the new John Cooper Works Clubman and Countryman and was comprehensively redeveloped for the new edition of both models.

(Click Here for details about the early version of the Mini EV.)

The optimized system consists of a power take-off on the front axle transmission, a two-section prop shaft and a rear axle transmission with an electro-hydraulically regulated hang-on clutch. It’s tied to the vehicles dynamic stability control system, and the is constantly adjusting to ensure the ideal power distribution ratio between the front and rear wheels, to provide the most efficient and responsive ride.

All of this isn’t much unless the new models sit on frames able to handle the race-like performance of the rest of the vehicle. The model-specific versions of the single-joint spring-strut-type axle for the front wheel and the multi-joint rear axle were optimized in terms of their component rigidity, kinematics and weight, to create a thrilling racing sensation from the amazingly high drive output, Mini notes.

And what’s a John Cooper Works version of a Mini without a distinctive look. The 2019 iterations of the Clubman and Countryman don’t disappoint on this front. Both enjoy optional contrast paintwork in red for the roof and the mirror caps, an individual design for the side scuttles by the additional indicators, and the John Cooper Works logo in the radiator grille and tailgate.

The central air inlet of both models has a honeycomb pattern structure. The inlet of the Mini John Cooper Works Countryman also has a red surround. A red cross-member subdivides the newly designed radiator grille of the new Mini John Cooper Works Clubman. Its headlamps, rear lights and rear apron also display the new design of the latest model revision for the Mini Clubman.