Croatian company positions itself as a major supplier of electrification technology and components. 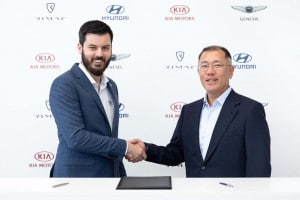 Alliances and joint ventures are becoming as much the norm as the exception in today’s auto industry, but Hyundai Motor Group just entered a particularly strange-bedfellow sort of relationship, investing nearly $90 million in Rimac, the Croatian manufacturer of battery-electric supercars.

The Korean parent of the Hyundai and Kia brands will not only invest 80 million euros in Rimac Automobili but also establish a technology partnership that will put some high-performance electric vehicles in their future line-ups, as well.

“Rimac is an innovative company with outstanding capabilities in high-performance electric vehicles,” said Euisun Chung, Executive Vice Chairman of Hyundai Motor Group. “Its startup roots and abundant experience collaborating with automakers combined with technological prowess makes Rimac the ideal partner for us. We look forward to collaborating with Rimac on our road to Clean Mobility.”

As is the case with many current tie-ups in the auto industry, the relationship won’t be monogamous. Rimac, for one thing, has also formed a link to Italian design house Pininfarina which will use the Croatian company’s drivetrain technology in the new Pininfarina Battista hypercar that debuted at the Geneva Motor Show earlier this year. 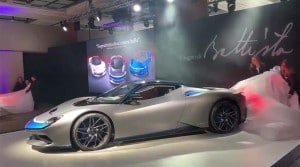 The Pinininfarina Battista made its debut in Geneva this year and increases the focus on electric supercars..

Porsche, which is just getting ready to launch sales of its first all-electric model, the Taycan, also is pairing up with Rimac. The German manufacturer – itself a subsidiary of Volkswagen AG – last June said it was taking a minority 10% stake in Rimac.

“Rimac has impressively demonstrated its credentials in the field of electromobility”, Lutz Meschke, Deputy Chairman of the Porsche Executive Board explained last year.

To casual observers, a pairing of Porsche and Rimac might make more sense. The Croatian company has developed a string of super high-performance vehicles, such as the Concept One and Concept Two, that play in the most exclusive of automotive niches.

For its part, Porsche has been experimenting with electrified propulsion since launching its 916 Spyder, a plug-in exotic, in 2013. The Taycan is expected to be the first in a string of all-electric models.

While early battery-electric vehicles, such as the Nissan Leaf, were relatively slow and stodgy, companies like Rimac and Porsche are changing the formula, taking advantage of improved battery and motor technology – and the fact that those motors make virtually all of their torque the moment they are turned on, a major plus in the performance market. 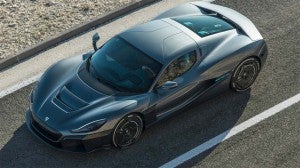 The Rimac Concept Two supercar can handle a quarter mile in a mere 9.1 seconds.

But even more mainstream manufacturers are shifting focus, betting that by not only extending range but boosting performance they can appeal to a broader swath of buyers – and also command more of a premium for their future electric vehicles. That could prove a big plus because the higher cost for EV technology is expected to limit profit margins for years to come.

(Topping 1,000 hp is a club more and more exotic makers are entering. Click Here for more.)

Exactly what the Koreans have in mind they are not saying. Both of the Korean marques have begun rolling out new battery-cars, including the all-electric Hyundai Kona EV and the pure electric version of the Kia Niro.

“We are very impressed by the Hyundai Motor Group’s vision and prompt and decisive initiative,” said Mate Rimac, the Croatian firm’s founder and CEO. We believe that this technology partnership will create maximum value for our companies and their customers.”

The collaboration, he added, could help his “young and relatively small but fast-growing company” position itself not just as an exotic car manufacturer, but “as a Tier-1 electrification components supplier to the industry.”

(Ferrari to unveil new hybrid supercar this month. Click Here for the story.)