The “only way for Tesla to become financially sustainable.”

Tesla's Elon Musk has ordered employees to rein in spending on virtually everything.

Tesla will need to engage in some “hardcore” cost-cutting, CEO Elon Musk told employees in an e-mail late Thursday, a move that comes in the wake of an unexpectedly severe first-quarter loss.

The automaker earlier this month was able to raise $2.7 billion through a combination of stock and debt offerings, but investors have become increasingly wary of the challenges that face the automaker – Tesla facing substantial debt repayments on top of the costs involved in the development of an array of new products and a new plant in China.

The latest cash infusion, according to Musk, will only let it go for another 10 months without getting back into the black, he wrote, which “is why, going forward, all expenses of any kind anywhere in the world, including parts, salary, travel expenses, rent, literally every payment that leaves out bank account must (be) reviewed.”

Tesla lost $702 million during the most recent quarter. Factoring out one-time charges that still came in at $494 million, or $2.90 a share, substantially worse than the consensus Wall Street estimate. The downturn largely reflected a slowdown in sales during the three-month period, an issue that has particularly concerned investors wondering if Tesla will find it more difficult to lure in new customers in the coming months after fulfilling much of the big order bank it had accrued after first announcing the Model 3.

Tesla already began cutting costs when it announced layoffs of 7% of its workforce in January.

For his part, CEO Musk told analysts and reporters during an earnings conference call that Tesla would likely continue in the red for the first half of this year – after turning a profit during the final two quarters of 2018. The question is whether it can get back in the black by the third quarter of this year.

A number of analysts have grown bearish on Tesla, Evercore ISI this week slashing its target price for the automaker’s stock for the second time in a month, from $240 to just $200.

Tesla has traditionally traded well above conventional car companies like General Motors, Toyota Motor Corp. or Volkswagen AG but, “The only thing that can justify such valuations is supernatural growth and best in class execution. Both are in question right now,” Evercore’s automotive team wrote to investors.

“Tesla is a car company. It needs and burns cash like a car company,” they added, warning that, “The longer questions around execution and growth persist, the more difficult the valuation is to defend.” 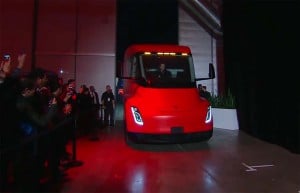 Tesla's financial pressures are driven, in part, by the cost of developing new products like the Semi.

Not all of the analysts who follow Tesla have grown sour. And the recent sales of new stock and debt instruments – which raised more cash than anticipated — showed that the company retains its luster with many investors.

Nonetheless, even the company’s proponents have called for Tesla to take steps to firm up its balance sheet.

The company has already been moving to cut costs. Last year, it hired a number of new employees at its Gigafactory in Reno, and its Fremont, California assembly plant to help overcome problems that had slowed production of the then-new Model 3 sedan to a crawl. But, in January of this year it began laying off 7% of its workforce.

That’s on top of the outflow of senior executives who have left the company over the past year. The latest to tender a resignation is Dave Arnold, director of global communications, who said this week he is leaving after two years.

In terms of the latest belt-tightening, Musk’s letter to employees said, “This is hardcore, but it is the only way for Tesla to become financially sustainable and succeed in our goal of helping make the world environmentally sustainable.”

(“Do you think we’re S3XY,” Musk asks as Model Y rolls out. Click Here for more.)