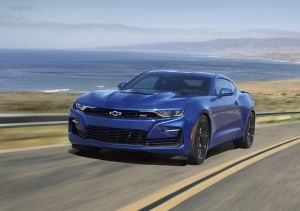 Chevrolet is planning to change up the appearance of the 2020 Camaro due out next fall with a new front-end appearance for the SS model as well as a new LT1 V-8 performance model at a relatively modest price.

Other changes promised for 2020 include a making a 10-speed-automatic transmission available with the 3.6-liter V6 used in the 2020 Camaro line-up.

“Customers spoke, and we listened,” said Steve Majoros, director of Chevrolet passenger car and crossover marketing. “The overwhelmingly positive reaction to the Shock’s stylized design helped prompt its transition from concept to production.”

Muscle cars are the one segment of the traditional passenger car market that has shown signs of life as sales of trucks, sport-utility vehicles and crossover have boomed in the past five years, accounting nearly 70% of all light-duty vehicles sales. 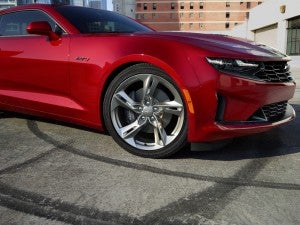 But GM’s share of the muscle car segment has slipped as both the Ford Mustang and Dodge Challenger moved ahead of the Camaro in sales during the first quarter of 2019, according to the most recent sales figures.

Chevy said the new Camaro SS front-end appearance is based on the design of the Camaro Shock show vehicle that debuted last fall at the SEMA Show in Las Vegas. The SS now features a repositioned bowtie emblem in the upper grille and a body-color bar between the upper and lower grilles.

The new LT1 model combines the content and design of the Camaro LT and SS. It is powered by the 455-horsepower LT1 engine, making it the most affordable choice for V-8 performance in the Camaro line-up with a starting manufacturer retail sales price of $34,995.

“The new Camaro LT1 is a great choice for those seeking a pure V-8 performance experience,” said Majoros. “And at less than $35,000, it will be one of the most affordable V-8 performers on the market.” 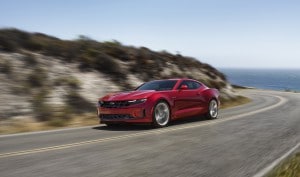 The Camaro LT1 is offered in coupe and convertible models, with a standard six-speed manual transmission or an available 10-speed automatic.

The newly available 10-speed automatic transmission is now matched with the 3.6-liter V-6 engine in Camaro LT models. It is based on the 10-speed design offered with the Camaro SS and ZL1 but tailored for the performance parameters of the V-6.

(To see more about Ford muscling up its “entry-level” Mustang, Click Here.)