Could Tesla’s High-Flying Ride on Wall Street be Ready to Come Crashing Down?

Tesla CEO Elon Musk has plenty to worry about as investors turn bearish on its stock.

After sliding to its lowest level since December 2016 on five days of losses, Tesla stock fell to its lowest level in nearly 30 months, at just above $200 — and one key analyst, Morgan Stanley’s Adam Jonas, warns Tesla could see the stock plunge to just $10 a share.

Not much has gone right for the California automotive upstart in recent months, starting with word that first-quarter sales had fallen well short of expectations. Its unexpectedly deep, $702 million loss for the quarter didn’t help. And the situation only grew worse when CEO Elon Musk last week ordered a “hardcore” belt-tightening covering “literally every payment that leaves our bank account.” Then, the National Transportation Safety Board weighed in, blaming a fatal March 2018 crash on Tesla’s much-ballyhooed Autopilot system.

Even where the automaker appeared to pull off a coup, topping substantially what it had expected to raise with last month’s combination of stock and debt offerings, Musk told employees in an e-mail, that the $2.7 billion Tesla brought in “actually only gives us about 10 months at the Q1 burn rate to achieve breakeven!”

Few automotive stocks have come close to riding the sort of rollercoaster that has become the Tesla norm. While deep dips have often been followed by breathtaking highs, The response to Tesla’s ups-and-downs has been more severe than in the past – as apparent by a look at its $387.46 52-week high and its low for the year of $195.25. 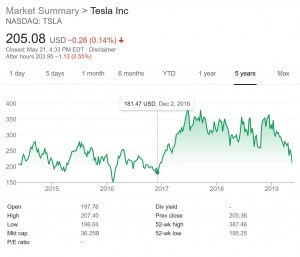 Even at that low point, Tesla continues to command multiples that conventional automakers could only hope for. Ford shares this week are holding just over $10, giving it a market cap of around $41 billion. General Motors, which has seen its shares sink for much of the past month, Closed just under $37, marking another loss.

But it was not all that long ago that Tesla and GM had nearly the same market capitalization. Now, even after the problems of the last few months, GM’s $52 billion price tag is nearly a third above Tesla’s, at around $37 billion.

And the question is whether it will hold even that figure. While Tesla has long struggled to dismiss short-sellers – the bane of CEO Musk’s existence, he has made it seem – the number of bears among industry analysts has been growing.

“Tesla is a car company. It needs and burns cash like a car company,” the automotive team at Evercore ISI said last week, as it reduced its target price for Tesla shares for the second time in a month, from $240 down to $200. “The longer questions around execution and growth persist, the more difficult the valuation is to defend,” investors were advised.

Wedbush Securities, on Sunday, lowered its own target from $275 to $230 a share. Meanwhile, T.Rowe Price Associates has sold off 81% of its Tesla holdings so far this year.

(“Hardcore” belt-tightening a must, says Tesla’s Musk. Click Here for the story.) 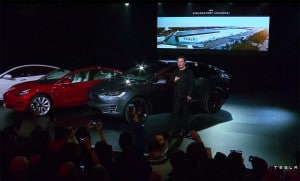 Tesla CEO Musk shows a rendering of the future assenbly plant in Shanghai that will be crucial to the automaker’s future.

Adam Jonas, one of the automotive market’s most closely followed analysts has now weighed in with an even more pessimistic viewpoint, “Moving our bear case to $10 from $97 previously.”

That doesn’t mean Jonas sees the bottom falling out for Tesla, at least not at the moment, but he warns that the situation could reach true crisis proportions if the carmaker comes up significantly short of its sales expectations for China. The world’s largest auto market is moving aggressively towards battery power thanks to the Beijing government’s New Energy Vehicle, or NEV, mandate. And Tesla hopes to take advantage of that with a plant it is building in Shanghai set to open around the end of this year.

“We believe investors must consider global trade and geopolitical risks as Tesla’s dependency on China increases,” Jonas wrote in a Tuesday advisory. “To the extent trade tensions between the US and China are focused on industries and technologies with national security/IP sensitivity, we would expect Tesla’s China story may continue to be heavily discounted by the market.”

Despite such risks, he isn’t set to write off Tesla, at least not yet. On the bullish side, he sees opportunity for Tesla shares to rise back up to $391, not far off from the brief high the stock hit after Musk announced his abortive plan to take Tesla private. Jonas’ middle-ground forecast is $230 a share, in line with a number of other analysts – but well off where the automaker had peaked over the last year.

(Click Here to find out how Tesla is updating Models S and X software to reduce battery fire risks.)