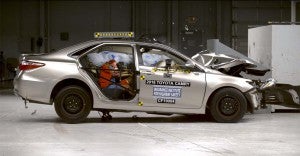 Rear-seat occupants are less likely to survive some frontal crashes than those up front, warns the IIHS.

Automotive manufacturers have made significant improvements in safety in recent years, but rear-seat passengers may be getting left behind, according to a new study by the Insurance Institute for Highway Safety.

The insurance industry trade group studied more than 100 fatal crashes, while conducting a series of its own tests, and found that passengers seated in the rear are less likely to survive a frontal collision because they often don’t have access to effective safety systems such as frontal airbags.

“Manufacturers have put a lot of work into improving protection for drivers and front-seat passengers,” IIHS President David Harkey said in a statement. “We hope a new evaluation will spur similar progress in the back seat.”

(Over 12 mil non-Takata airbags could have potentially fatal defect. Click Here for the breaking story.)

Under federal law, front seat occupants must be protected by frontal airbags, but while it’s become commonplace for even entry-level vehicles to offer additional airbag systems, such as rollover bags, it is rare for those in the back seat to have similar frontal protection. The IIHS study also found that the seatbelts used for rear-seat occupants can actually cause injuries in aggressive collisions. 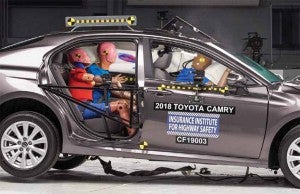 Rear-seat occupants don't have many of the safety features now commonplace up front.

Previous studies by the IIHS, as well as the National Highway Traffic Safety Administration have found that seatbelts can significantly reduce the risk of death or injury for rear-seat, as well as front-seat, occupants. But belts alone are not entirely effective, the new report indicates.

The IIHS studied 117 front-end crashes in which rear-seat occupants aged 6 or older were killed even though they were wearing seatbelts. While crashes involving fatal head injuries were generally not considered survivable, the organization concluded that the majority of fatalities involving chest injuries could have been avoided with improved vehicle design and the use of better safety equipment.

“The fact that our sample had mostly survivable crashes tells us that we need to do a better job restraining adults and older children in the back seat,” said IIHS Senior Research Engineer Jessica Jermakian, the lead author of the new report.

The organization is not making specific recommendations, suggesting that manufacturers need to address the problem and come up with solutions. But the report does point to several possible approaches.

(Takata airbag kills 16th person in the U.S. Click Here for the story.) 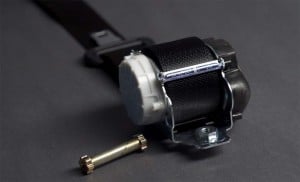 That could include the addition of new airbags for rear-seat occupants. Ford has studied one approach, equipping several vehicle lines with special seatbelts that have airbags belt into their webbing.

The IIHS also noted that the seatbelts used in the back of most vehicles aren’t as sophisticated as those found up front. For one thing, they are far less likely to use pre-tensioners that automatically tighten up when a crash begins. By cinching down, a passenger’s body is less likely to build up momentum or strike a fixed object, such as the instrument panel or the back of another seat. Rear seatbelts also are less likely to use force limiters that, when a crash is severe, can help reduce loads on the chest by allowing the belt’s webbing to stretch slightly.

“It’s not that the rear-seat has become less safe, it’s that the front seat has become more safe over time,” said IIHS President Harkey, adding that, “We’re confident that vehicle manufacturers can find a way to solve this puzzle in the back seat just as they were able to do in the front.”