Ghosn's wife pushed Macron to talk with Abe about the case. 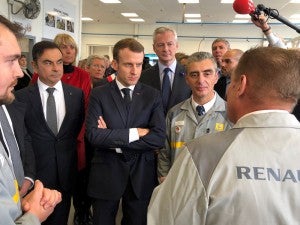 A day after former Renault Nissan chief Carlos Ghosn was slapped with a new charge by Japanese prosecutors, the leaders of the two countries the automakers claim as home discussed the ongoing investigation.

French President Emmanuel Macron and Japan’s Prime Minister Shinzo Abe discussed the future of the now-shaky Alliance as well as the aforementioned Ghosn.

“This industrial partnership has shown its resilience,” a French presidency official said in a statement. “It is now up to the industry leaders in charge to make the alliance even more solid so that it can face up to the technological disruptions underway in the auto industry.”

According to Reuters, the official said France respected Japan’s judicial system; however, France was monitoring the situation closely to be “very vigilant concerning the respect of the rights and integrity of Mr. Ghosn as a French citizen.”

(Former Nissan Chief Ghosn smacked with a new charge in Japan. Click Here for the story.)

Officials emphasized that Ghosn, like all French citizens, had a right to the presumption of innocence and consular protection, stopping short of saying it would become involved in the investigation. 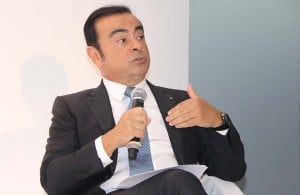 Former Renault-Nissan Chief Carlos Ghosn said his arrest and detention is due to "plot and treason."

Japanese prosecutors indicted Carlos Ghosn on Monday on another charge of aggravated breach of trust. The charge came on the day that Ghosn’s latest detention period was set to expire. The two leaders suggested that Ghosn’s case shouldn’t affect the 20-year-old alliance between Renault and Nissan.

Abe was in France as part of a tour of Europe and North America ahead of the G20 summit being held in Osaka, Japan, in late June. He met with Macron for lunch and to essentially lobby for Japanese interests.

Macron’s support for the Alliance has been long-standing; however, his involvement in the Ghosn affair may have been at the insistence of Ghosn’s wife, Carole, who has publicly pushed for the French government to get involved.

Carole Ghosn had earlier pushed Macron to raise the topic with Abe during their meeting.

“What is happening in Tokyo to my husband worries me and all those who legitimately ask for respect, equality and protection from the justice system,” she said in an emailed statement. Carlos Ghosn, a French citizen, deserves “the most basic rights to defend himself and a fair trial.”

(To see more about Ghosn being rearrested on new corruption charges, Click Here.)

Ghosn has been charged with enriching himself as the expense of Nissan to the tune of at least $5 million. The long-time executive maintains he is innocent and the victim of “plot and treason” by other Nissan employees.