Grand tourer will use E-Boost driveline. 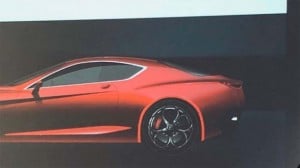 An image snapped at an Alfa Romeo event offers a hint of what the upcoming GTV will look like.

Fiat Chrysler Automobiles has big plans for the Alfa Romeo brand, as it announced last June during a meeting in Milan to unveil its next five-year plan.

By 2022, the Italian marque is expected to have at least seven different models in its showrooms, including three crossovers. But don’t think Alfa is abandoning the classic sedans and coupes it has long been known for, as this leaked image indicates.

According to the Club Alfa website which initially published the image, this is the Alfa GTV coupe, one of two extreme performance models that will rely on some form of hybrid powertrain to punch out a whopping 600 horsepower.

(Alfa and Maserati both are betting big on battery power. Click Here for more.)

Short for Gran Turismo Veloce or, in English, Fast Grand Touring, the GTV badge has a long history with Alfa, first introduced in 1967 and used on some of the brand’s fastest models. The name was last used in 2005 on a front-wheel-drive coupe. 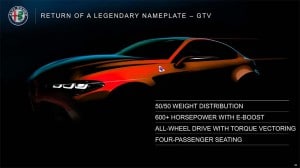 Alfa first teased the GTV at that Milan event. The image shown here appears to have been revealed during an official company event, and it suggests the automaker has tweaked the design of the coupe since then, however.

The new GTV, which should be ready to roll sometime in 2021, is based on Alfa’s Giorgio architecture – the same used for the current Giulia and Stelvio models. The platform was specifically designed to permit the use of an electrified drivetrain. Last June, FCA officials confirmed the GTV will be one of two “specialty” models using some form of E-Boost. The other will be the reborn 8C supercar which is expected to deliver in excess of 700 hp.

Exactly what form the E-Boost package will take is unclear, though it is likely to offer only limited range in all-electric mode. The gas side of the driveline is expected to be Alfa’s twin-turbo 2.9-liter V-6 that currently makes as much as 505 hp. Based on the original teaser, we expect the GTV to offer all-wheel-drive, torque vectoring and a 50/50 weight distribution.

Expect the GTV to seat four, though rear leg and headroom will likely be severely limited. A convertible version of the grand tourer is expected to follow about 18 months after the launch of the coupe. 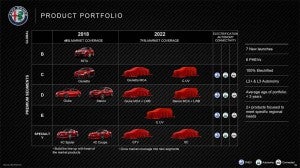 Competition will include the likes of the new BMW 8-Series, as well as the Lexus LC500.

There had been rumors that Alfa might preview the GTV before its official debut but the concept it revealed at the Geneva Motor Show last month turned out to be the Tonale, a compact crossover.

The upcoming Alfa Romeo 8C will push the envelope significantly further than the GTV. It’s expected to opt for a carbon fiber monocoque, its twin-turbo gas engine mounted midship. With the added power from its own E-Boost system, the 8C is expected to be able to hit 60 in under 3 seconds.

“We’re going after Tesla,” said Kuniskis, noting that some form of electrified driveline will be available on all future Alfa models, as well as those from sibling Italian brand Maserati. That brand will offer versions of the Quattroporte and Levante with all-electric drivelines. “Everything gets electrified,” he said.