Genesis Bringing Out its Battery-Electric Best for NYIAS

Luxury brand is also going to show off new G90 as well. 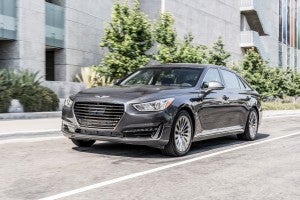 The Genesis G90 full-size sedan provides plenty of luxury appointments and gets a few updates for this year.

Hyundai’s luxury brand, Genesis, has finally revealed what it plans to put on display at the New York International Auto Show in a few weeks: an electric vehicle and the new Genesis G90 sedan.

The automaker showed off the Essentia Concept coupe in New York last year, but this year’s battery-powered beast is likely to be closer to a production vehicle than a concept, according to the report. The EV, whose name hasn’t been revealed, is likely to first to built off the South Korean automaker’s EV platform.

Similar to those used by Volkswagen, Mercedes-Benz and other automaker, it will be the underpinnings for several EVs produced by Hyundai, Genesis and Kia. This dedicated platform is still couple years away, which when the Genesis EV should be ready for prime time.

The dedicated EV platform will be used for B- and C-segment cars with the new Genesis battery-electric being among the first to use this platform. However, Genesis likely will use other EV platforms too. By 2025, Hyundai and Kia expect to have 14 EVs as part of 38 electrified offerings.

Unlike the move among many automakers to make these EV look more mainstream, Hyundai and Genesis may opt to walk on the wild side a bit, offering buyers a choice. Donckerwolke said the variety is needed to attract the future EV buyers that aren’t necessarily car people.

(Click Here for more about the remake of the 2020 Sonata.)

He’ll likely use the latest in 3D equipment to ensure that differentiation from other brands while simplifying the design and building process. Last year’s Essentia concept showed off 3D-printed carbon fiber ornament, however, Donckerwolke his bigger plans.

“With 3D printing we have to ask things like whether we could print a [seat] fabric that’s thick enough that you don’t need foam.” The show will reveal what he means.