Far more than just a Wrangler with a bed.

The 2020 Jeep Gladiator Rubicon has 11" ground clearance and can handle 30" of water.

“Sunny California” hasn’t been nearly as bright blue as normal during the last few months, with record rainfall across the state and even some snow down in the Los Angeles hills.

Up here in Healdsburg, in the center of Napa Valley wine country, farm fields are waterlogged, dirt roads turning to gooey mud. While not everyone might be pleased, these are the perfect conditions for testing out the all-new 2020 Jeep Gladiator.

By the mid-1950s, Jeep actually offered two pickups, including both the CJ and bigger FJ. And in 1962, it introduced the Gladiator nameplate for the first time. Since then, there’s been a Jeepster Commando, a Scrambler, a CJ-10, and even a Commanche.

(Jeep plans one day sales of Gladiator launch edition – and is giving one year pay to play. Click Here for the story.)

But despite rolling out a series of concept models, like the 2003 Scrambler and 2005 Gladiator, the long-awaited truck unveiled at the Los Angeles International Auto Show last November marks the first time Jeep has offered a production truck in 27 years. So, as one can imagine, expectations are high.

The debut of the Jeep Gladiator was one of the high points of the L.A. show, though it hasn’t been without controversy. The new pickup is all hard edges and creases, a heavy-hauling Tonka Truck. Designers make no apologies for its edgy design. Quite the contrary. Like the latest-generation Wrangler that shares many of its underlying components, the 2020 Gladiator is a case of function over form.

The Gladiator shares many underpinnings with the Wrangler, but not everything.

During a morning presentation – and a series of follow-up interviews and conversations – Jeep officials stressed that the new Gladiator is, as marketing chief Scott Tallon put it, “not just a Wrangler with a bed on it. There were significant upgrades made, among other things, stretching the wheelbase to 137.3 inches to handle a five-foot steel bed.

There are three different versions, each with a different mission, but all of them feature a larger version of the Wrangler’s seven-slat grille that allows more air to flow into the engine compartment. That’s critical considering it can handle a segment-leading payload of 1,600 pounds and, when properly equipped, tow a trailer of up to 7,650 pounds.

Pretty much everywhere you look you recognize the way functionality was the first command for both Gladiator’s design and engineering teams. The off-road-ready Rubicon model, for example, has bigger wheel flares meant to house the standard 33-inch outside diameter tires it comes with. It can be stepped up to 34s, if a buyer wishes.

One of the questions that the Gladiator team has gotten used to answering is why its taken so long to bring back a pickup. One only has to think back to the early days of this decade when the overall U.S. car market collapsed and, in particular, record high prices slashed demand for trucks of all shapes and sizes. Even as SUVs and CUVs began to bounce back conventional wisdom had it that potential buyers preferred full-size offerings like the Ram 1500. 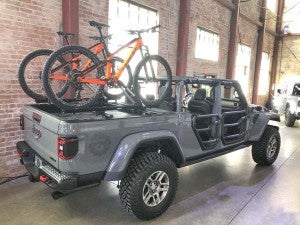 Jeep plans to launch 200 accessories at or shortly after the launch of the 2020 Gladiator.

Parent Fiat Chrysler Automobiles was just one of the manufacturers that walked away from midsize pickups, along with General Motors, Ford and Honda. But, as is often the case, group think can prove to be spectacularly wrong, as GM demonstrated with the 2014 revival of the Chevrolet Colorado and GMC Canyon.

Last June, the late Sergio Marchionne, FCA’s former CEO, announced plans to add a second midsize pickup, this one for the Dodge brand. So far, however, that project appears to be stalled, according to several senior execs who talked on background to TheDetroitBureau.com. That’s certainly good news for Jeep, which could have the field all to itself.

What’s intriguing about the current crop of midsize pickups is just how much territory they cover, from the light-duty, crossover-based Honda Ridgeline to serious off-roaders such as the Toyota Tacoma, Chevy Colorado Bison ZR2 and the ultimate Jeep version, the Gladiator Rubicon. That version has a ground clearance of 30 inches and can ford up to 30 inches of water. Meanwhile, it has an approach angle of 43.6 degrees and a departure angle of 26 degrees.

During a long day’s driving, on and off road, even the Gladiator Sport and Overland proved immensely capable, both barely phased by the deeply rutted tracks at the test site Jeep had laid out. 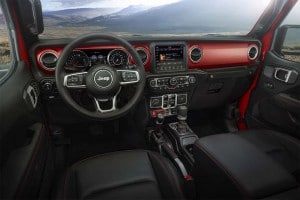 Gladiator gets a modern instrument panel but picks up some historical design cues.

But the Rubicon is a true mind-blower. As some of these images illustrate, there was literally nothing that led it to lose its cool, even while descending down a 35-degree slope made up of fractured rock.

An equal surprise was how well-mannered the Rubicon was on-road, especially the Sport and Overland models which let us flog our way through sharp corners with little concern and surprisingly modest head toss. Give some credit to the solid axle and five-link coil suspension used on Gladiator, the Rubicon getting beefed-up Fox shocks.

Motivating all versions of the 2020 Jeep Gladiator is the time-tested 3.6-liter Pentastar V-6 which, in the Gladiator, does not use the mild-hybrid system first introduced on the Wrangler. The engine is rated at 285 horsepower and 260 pound-feet of torque and is paired to a smooth eight-speed automatic or an optional six-speed manual.

As you might expect of Jeep, there are two different all-wheel-drive system, starting with the Command-Trac 4×4 on the Sport and Overland models, and the Rock-Trac system on the Rubicon.

That model also gets Jeep’s Tru-Lok differentials and a variety of ways that a serious off-roader can enhance its maneuverability, among other things, by disconnecting the rear sway bar with the touch of a button on the instrument panel.

Our Rubicon test vehicle also offered an off-road mode on its big infotainment screen, allowing us to keep an eye on the Gladiator’s pitch and roll. The pickup also can be equipped with a forward-and-down-facing trail camera that lets you see what you’re approaching from as little as two feet off the bumper.

If the only thing that distinguished the 2020 Jeep Gladiator from the competition was it off-road capabilities we’d be questioning its long-term viability. But the team thought through pretty much everything we could imagine.

Take the truck’s tailgate, which can open and lock in at a 45-degree angle. That makes it easy to safely load and secure long 2x4s and 4×8 sheets of plywood.

The rear seats use a 60/40 split that allows an owner to equip Gladiator with locking under-seat storage. The seats can also be folded over in several ways. 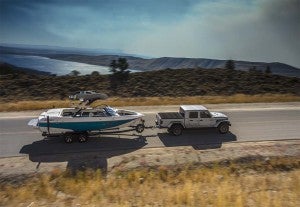 In all, FCA’s Mopar parts division plans to have 200 accessories available, from outboard lighting to bike and kayak carriers, at or shortly after launch. A number of those parts can be installed either at the factory or at a special Mopar customization center, noted Kim Mathers, a manager with the parts brand.

“We expect Gladiator to be among the most accessorized vehicles in the Jeep portfolio,” she told us.

Expect to see a flood of additional options from aftermarket vendors, of course. But one good thing about going with Mopar is that many of its accessories can be added onto the base price and factored into your monthly payment.

Jeep carried over a number of appealing features from Wrangler, meanwhile, including an easy-to-use fold-down windshield and removable doors. An example of the thinking that went into the truck can be found when you open the upper level of the center console. There’s a holder that lets you know exactly what bolt goes back where.

The 2020 Jeep Gladiator isn’t going to win over everyone. Its Tonka design doesn’t always connect, especially from the rear, where the taillights stick out sideways from the truck’s bed by several inches. 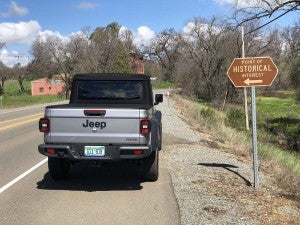 Jeep has a long history of pickups but Gladiator marks the end of a 27-year gap.

But for those who are looking for a serious truck, whether for work, play, or even commuting in Snowbelt climates, the 2020 Jeep Gladiator needs to be checked out closely.

Looking ahead, Jeep plans to add a second powertrain for Gladiator, though the diesel is actually not expected to have quite the towing power of the gas engine.