Fiat Chrysler is partnering with Google and Samsung to upgrade its in-car infotainment, including Uconnect.

Fiat Chrysler Automobiles will team up with Google and Samsung in a push to put connected car technology in all of its vehicles by 2022, the automaker announced on Tuesday.

The new system being developed by the three partners will use and update FCA’s current Uconnect system and rely on the Google Android operating system. It will allow the automaker to offer a common system worldwide, rather than an infotainment system that is currently tailored to individual markets.

“The modern, in-vehicle experience must be designed for seamless connectivity and digital content, and provide an integrated, but familiar experience for the on-the-go consumer,” said Patrick Brady, vice president of Engineering at Google.

Infotainment technology is now all but ubiquitous on today’s cars, but automakers are being pushed to go beyond what their current systems are generally capable of – primarily a mix of music, navigation and some onboard vehicle functions.

The next-generation system being developed “will deliver an enhanced user experience that will assist owners by predicting maintenance needs, locating fuel and charging stations, receiving traffic prompts and restaurant offers and providing live customer-care assistance at the push of a button,” FCA said in a statement. 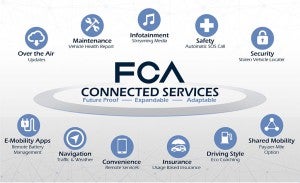 FCA is expanding its Connected Services offerings through its new deal with Google and Samsung.

The new system also will be adding the ability to deliver over-the-air, or OTA, software updates, “ensuring owners benefit from new capabilities and the latest software applications,” the carmaker added.

The new system also is expected to allow future Fiat Chrysler products to be able to communicate with other vehicles and a connected-car infrastructure. Several competitors have already begun integrating such systems. Some Audi models, for example, can now track when traffic lights are about to change in cities like Las Vegas that have set up a connected-car communications system.

The U.S. Department of Transportation has established a test network in several parts of the country, including a 100 square-mile grid around the Detroit suburb of Ann Arbor, Michigan, to test connected car technology. Eventually, this will allow vehicles and their drivers to track weather and traffic conditions and provide alerts, for example, if a motorist runs a red light.

Connected car technology also is expected to play a role in autonomous driving by allowing self-driving vehicles to share data on road and weather conditions, among other things.

To date, FCA has done little to develop its own self-driving capabilities, though it has partnered with Google spinoff Waymo to provide as many as 60,000 of its Chrysler Pacifica Hybrid minivans for use in the Waymo One autonomous ride-sharing service launched last December. The two partners have not confirmed whether FCA products may eventually use Waymo technology on retail models sold by the automaker.

The new partnership could make it easier to integrate future Waymo technology into FCA vehicles, however.

Autonomous vehicle technology is expected to radically change the auto industry’s business model in the coming decades, especially if ride-sharing services like Waymo One, Uber and Lyft are able to convince millions of Americans to give up owning a private vehicle.

But other major changes could be in the works, as well.

The new system being developed with Google and Samsung will support the FCA Mobility Services portfolio, the automaker said. Among other things, that includes the ability to pay by the mile for insurance, and will let owners place their vehicles in car and ride-sharing services that could help them cover some of their monthly payments.

FCA, Google and Samsung plan to begin rolling out their new system late this year and hope to have it available across the automaker’s product line-up by 2022.