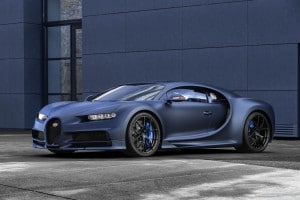 The Bugatti Chiron ans 110 Bugatti is one of 20. The limited edition racer marks the company's 110th anniversary.

Perhaps more precisely the limited-edition Chiron Sport “110 ans Bugatti,” the specialty $4 million racer to commemorate the founding of the company in 1909 by Ettore Bugatti as well as the country where the company was created. The car is designed to “serve as inspiration for a company that follows its founder’s spirit.”

The limited-edition Chiron Sport “110 Ans Bugatti” also emphasizes the company’s French heritage with an exterior livery, if you will, in the tricolor, “Le Bleu-Blanc-Rouge.” That scheme rolls over to some parts of the interior as well. Just 20 of the cars will be built.

Since the end of the French monarchy, the three colors have represented the French Revolution with its famous ideals of liberty (blue), equality (white) and fraternity (red). 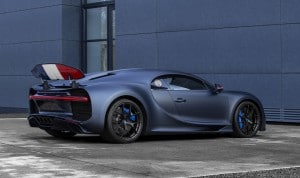 The ans 110 Bugatti reaches a top speed of 260 mph and is laden with French tricolor accents.

“Molsheim, in the Alsace region of France, is an essential element in Bugatti’s brand history and also where we are planning our future,” said Stephan Winkelmann, president of Bugatti Automobiles S.A.S., in a statement.

The body and the front end are made from carbon fiber and the Bugatti line and radiator from aluminum. The matte Steel Blue paintwork at the rear of the car gives it almost a sinister look. The typical Bugatti line, the dominant “C” surrounding the passenger compartment, is also painted Steel Blue. The front end consists of exposed carbon fiber in Steel Blue Carbon, once again a matte color suggestive of steel.

The two-tone color scheme is reminiscent of historic models: in the 1920s, this type of paintwork was a sign of luxury and exclusiveness, while it now signals a sporting character and high technological competence. In the case of the Chiron “110 ans Bugatti,” the color scheme divides the bodywork into the monocoque and engine compartment. 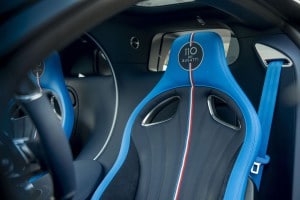 The Bugatti Chiron ans 110 Bugatti seats feature the French tricolor as well as commemorative badge on the headrest.

Behind the alloy wheels painted in “Nocturne” matte black, the French Racing Blue brake calipers are visible whilte the aluminum filler cap is sandblasted and hand-polished. The “110 ans Bugatti” emblem, with the French flag running vertically through the logo, is at the center of the cap.

The Sky View roof consisting of two fixed glass panels above the driver’s and passenger’s seats, available as an option on the Chiron, is a standard feature of the special edition. These panels have a newly developed laminated structure with thin glass and four intermediate layers. 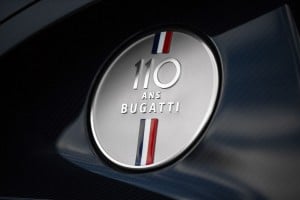 The aluminum fuel filler cap is sandblasted and polished to a lustrous sheen.

The new Bugatti is powered a massive 8.0-liter W16 engine with four turbochargers. It delivers 1,103 kW/1,500 PS and 1,600 Newton-meters of torque. The engine compartment cover is Steel Blue and Steel Blue Carbon. The inserts on the cylinder banks are made from aluminum with a clear anodized finish.

“The ultimate hyper sports car from France is still the most powerful, highest-quality, fastest and most comfortable gran turismo in existence – a blend of elegance, quality, unique character and power,” Winkelmann said.