Better Late than Never, Mazda Gets into Diesel Game with CX-5 Skyactiv-D 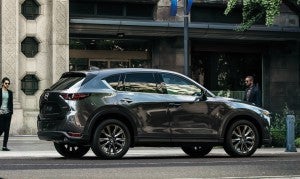 Mazda finally put a diesel in to one of its products: the 2019 CX-5 crossover.

Nearly five years after Mazda originally planned to launch its SkyActiv-D powertrain, the Japanese automaker is finally ready to make its first diesel engine a reality.

It pulled the wraps off the new powertrain at the New York International Auto Show on Wednesday, the oil-burner getting its first American application under the hood of the familiar Mazda CX-5 crossover. The diesel joins a growing mix of Mazda engine alternatives that just a year ago saw the launch of the breakthrough homogeneous-charged SkyActiv-X technology.

“As Mazda continues our climb toward premium, we will offer more powertrain choices that premium customers expect,” said Jeffery Guyton, the newly appointed president of Mazda North American Operations. “I am happy to share that Mazda’s SkyActiv-D 2.2-liter diesel engine is joining the U.S. powertrain line-up with our debut model, the 2019 CX-5 Signature AWD with SkyActiv-D.”

The timing of the diesel’s launch has been repeatedly set back as Mazda has struggled trying to find a way to balance emissions, performance and fuel economy. It didn’t help that Volkswagen was revealed to have cheated on its own diesel program, rigging two of its own engines to illegally pass federal emissions tests. Since that scandal broke in September 2015, demand for the technology has plunged, at least on the passenger car side of the market. 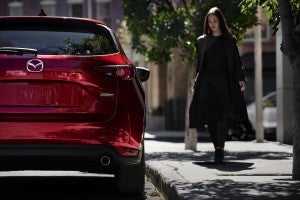 The 2020 Mazda CX-5 gets a diesel powerplant, the SkyActiv-D, after a two-year delay by the automaker.

Among light trucks, pickups, in particular, sales of diesels have taken off, with General Motors, Ford, Fiat Chrysler and Nissan all offering their own oil burner options.

Whether Mazda will have similar luck offering the SkyActiv-D in the CX-5 crossover remains to be seen, but the Japanese maker is betting the technology will appeal to at least a small but solid niche of buyers.

The new drivetrain produces a moderate 168 horsepower, but a full 290 pound-feet of torque which should play well to those looking to tow or haul heavy loads with their CX-5 Signature edition. A twin-turbo arrangement, Mazda claims, will help it deliver smooth torque across its powerband, the SkyActiv-D redlining at 5,500 RPMs.

At the same time, the new model is rated at a solid 27 mpg City, 30 on the Highway and 28 Combined, making it a segment leader.

(Click Here for our driving impressions of the 2019 Mazda3.)

Set to go on sale in a couple months, dealers have begun taking orders for the diesel version of the crossover. The 2019 Mazda CX-5 Signature AWD with the SkyActiv-D will start at $41,000, with delivery fees everywhere but Alaska adding another $1,045..

Facing increasingly stringent emissions and mileage mandates in the U.S. and other markets, Mazda has been expanding its powertrain options, the SkyActiv-D joining the recently launched SkyActiv-X. It’s the first commercial application of what is known as homogeneous charge compression ignition. Think of that engine as a diesel running on gasoline.

The Mazda engine does use a spark plug to assist under certain conditions, but by nearly doubling the normal compression ratio, the SkyActiv-X is able to deliver near-diesel levels of efficiency. It is so effective, in fact, it made it even tougher for Mazda engineers to finally get the SkyActive-D into production.

Mazda’s powertrain development program is far from wrapping up. The automaker is currently building a new factory in Mississippi in a partnership with Toyota. The two companies are expected to produce, among other things, new battery-electric vehicles at that plant. Timing and other details, however, have yet to be announced.