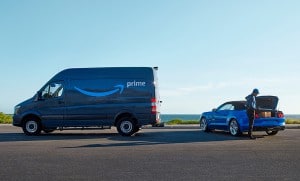 Ford is teaming up with Amazon to bring its Key by Amazon In-Car delivery service to eligible Ford and Lincoln vehicles.

Online shopping, led by Amazon, has made it easier than ever to get what you need at the click of a button. However, it’s also led to a new form of theft as boxes are left on front porches across America.

Amazon’s attempted a variety of things to cut down on those incidents, including Amazon Locker, where shoppers who are concerned about the safety of their purchases can send them to a locked box that can only be opened with a special code issued to that customer.

It’s effective, but who wants to drive to essentially a post office box to get your goodies. Now, Amazon is teaming with Ford to make deliveries safer and more convenient for Amazon Prime members. The “Key by Amazon In-Car delivery” makes it so the online retailer can deliver packages to the shopper’s vehicle.

“It’s a convenient, secure way to ensure your packages are delivered directly to you when you are out for the day, anticipating bad weather or wondering if your package is safe,” said Lorin Kennedy, FordPass Ecosystem Business leader, Ford Motor Co., in a statement. 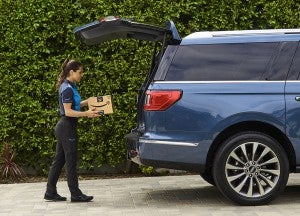 Amazon Prime will put your purchases straight into truck of your Ford or Lincoln vehicle.

Ford has been developing a variety of ways to make life easier for vehicle owners who are accustomed to life in a connected world. The automaker partnered with Domino’s Pizza to allow drivers get pies delivered by an autonomous vehicle complete with a warming oven to keep the food warm.

Additionally, the Dearborn, Michigan-based automaker offers voice-based digital assistant Alexa in many of its vehicles. The company lets drivers use Alexa to order and pay for Starbucks coffees. “It only takes a little imagination to think about where conversation ordering will show up next,” said Gerri Martin-Flickinger, Starbucks chief technology officer, at the event showing off the new technology.

Ford has been partnering with Amazon for the past few years on improving the connective vehicle services offered by the automaker. That began to take off when Alexa made its way into new Ford and Lincoln vehicles in 2017, allowing motorists to ask Alexa about things like traffic, the weather and restaurant tips, or to control some of their home automation technologies.

“Ford and Amazon are aligned around a vision that your voice should be the primary way to interface with your favorite devices and services,” said Don Butler, then-executive director, Ford Connected Vehicle and Services. “Customers will be able to start their vehicles from home, and manage smart home features while on the road – making life easier.”