A “seamless” blending of exterior and interior design. 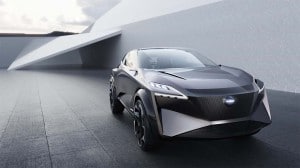 Nissan designers opted for a sharper and more angular approach to the design of the IMQ.

Think of the new Nissan IMQ concept vehicle as a rolling crystal ball. Following on the debut of the IMs prototype at the Detroit Auto Show two months ago, the Japanese maker says its latest concept “signals the direction of (its) next generation of crossovers.”

Make that battery-electric CUVs, for the concept vehicle that debuted today at the Geneva Motor Show reveals the next-generation e-Power system, an all-electric powertrain that you might think of as the familiar Nissan Leaf on steroids.

Actually, that is a bit misleading, as the Nissan IMQ carries with it a 1.5-liter gas engine that serves solely as a generator, providing energy when the battery is drained. That’s the same approach BMW has taken with its little i3 city car. The internal combustion engine never actually provides direct power to the wheels.

A pair of motors produce a combined 335 horsepower and 516 pound-feet of torque pushed to all four wheels to give the IMQ plenty of grip in adverse conditions like you’re likely to find around Geneva this time of year. 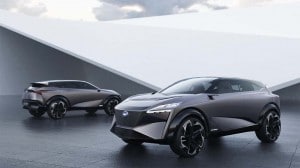 A pari of motors will allow the Nissan IMQ to deliver power to all four of its wheels.

Visually, the Nissan IMQ makes a rather bold statement. There is, of course, the familiar Nissan V-Motion grille, here framed by cats-eye lamps and heavily creased front fenders. Three dimensional ridges on the lower corners of the body – a design feature known as a lamella – add a craftsman-like detail. Muscular wheel arches do little to conceal 22-inch wheels shod with unique Bridgestone tires.

With the motors, batteries and other key powertrain components hidden in and under the load floor, the cabin boasts size class-above space. With outer-hinged doors yawning opening to provide easy access.

The automaker has adopted what it calls a “gliding wing” design for the instrument panel, while there’s prominent center console that extends into the rear of the IMQ.

The seats are thin but sculpted to both enhance comfort while also providing extra room for occupants. They’re done up in a two-tone, 3D fabric, the geometric pattern repeating on the instrument panel and parcel shelf, as well as on the door panel.

The instrument panel is dominated by an 840 millimeter, or 31-inch screen that goes completely black when powered down. The unusual shape of the steering wheel is designed to maximize visibility for the gauge cluster. There’s a secondary screen above the center console that plays host to the concept vehicle’s voice-controlled personal assistant.

The IMQ also features Nissan’s Invisible-to-Visible technology which debuted at the Consumer Electronics Show in January. The 3D system relies on a variety of onboard sensors, as well as Connected Car technology to let the driver “see the invisible,” the automaker explains, including vehicles and pedestrians who might be approaching from around a corner.

“The IMQ’s design combines traditional and modern Japanese influences and shows what’s possible when future crossovers are powered by Nissan Intelligent Mobility,” said Alfonso Albaisa, Nissan’s senior vice president for design. “With the IMQ, the interior and exterior are seamlessly blended together, signalling what our design direction may be for Nissan’s third generation of crossovers in Europe.” 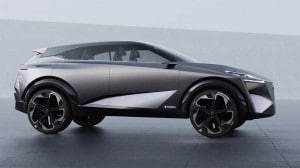 The IMQ is expected to strongly influence the design of Nissan's next-generation crossovers.

The new IMQ concept picks up where the IMs show car unveiled in Detroit left off, sending more signals about where Nissan will be heading over the next few years.

“Our strategy with electric vehicles isn’t if it will happen, but when it will happen,” said Denis Le Vot, the chief executive of Nissan North America,

The automaker recently introduced the first truly long-range version of its original battery-electric vehicle, the Leaf. And LeVot told TheDetroitBureau.com that it will have eight all-electric models in its global fleet by 2022. Alliance partners Renault and Mitsubishi will bring out four more. The second-largest of the Japanese automakers alone is forecasting it will aell about 1 million BEVs annually by mid-decade.

(Click Here for our review of the new, long-range Nissan Leaf Plus.)