Mercedes-Maybach is Coming Back

Super-luxurious crossover being built in Alabama. 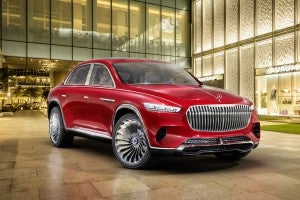 Mercedes-Benz plans to build the new Mercedes-Maybach GLS at its plant in Alabama for global distribution.

The Mercedes-Benz plant in Tuscaloosa, Alabama, is already churning out the GLS and a few other models, but the German automaker is adding one more to the line: The Mercedes-Maybach GLS.

Introduced in China last year as an EV concept, the Mercedes-Maybach GLS will join the next-generation sport-ute getting ready to hit dealerships later this year, according to Autonews. The plant will build the new Maybach for global distribution, the automaker noted.

Ultra-luxurious crossover is obviously playing up the theme from the original Maybach, which had its admirers, but didn’t sell in large enough numbers to build as a regular model in the 1990s and early 2000s.

The new version is based off the Vision Mercedes-Maybach which featured a tall cabin like an SUV, but a slew of car-like add-ons. However, the new model, according to reports, is uses a much more conventional looking crossover-like exterior.

While it may look like a more conventional crossover on the outside, the real magic for the Maybach will be the interior. That’s on purpose to appeal to Chinese buyers, which account for about 75% of Maybach S-Class sedan sales currently.

The GLS in baroque trim will features luxury touches like rear captain’s chairs and lots of rear legroom. Pricing hasn’t been released yet, but it’s likely to come in around $200k, which makes it competitive with the Lamborghini Urus and slightly more than the Bentley Bentayga.

(Click Here to learn how Mercedes is leading in U.S. luxury car sales.)

One analyst said, “The ultra-high-net-worth kids want something different, and these ultraluxury SUVs certainly fit that,” while another opined on its “appeal to the Kardashians and hip-hoppers, if they want something slightly different to the G-Wagen.”

The current Maybach line-up includes the Mercedes-Maybach S 560 4MATIC and Mercedes-Maybach S 650 Sedan. The absolute top-of-the range model from the luxury brand is the Pullman with vis-à-vis seating layout behind the partition (not available in the U.S.). With a length of 6.50 meters, the Pullman is the longest model of the S-Class family.

(More than a mid-cycle refresh: A first look at the new GLC. Click Here for the story.)

A $200K MSRP would also comfortably make the Maybach GLS the most expensive new car built in America, taking the title from the Acura NSX. With a great price comes great power, said to be a twin-turbo V8 with more than 560 horsepower. The coming GLS 450 will make do with somewhere around 360 hp.