Lyft continues to grow, but to accelerate that, the company is looking to raise big money through an IPO.

Running in the red every single quarter is normally not a good formula for success, though Tesla has shown that deficits aren’t necessarily verboten with investors. So, despite losing more than $2 billion during  the last two years alone, Lyft is preparing to go public.

The federal paperwork it filed last week is loaded with cautionary notes, and it appears to be asking potential investors to keep their eye on one development that could transform Lyft – as well as competitors like Uber and Waymo – into a cash cow: the arrival of driverless vehicle.

“We have incurred net losses each year since our inception and we may not be able to achieve or maintain profitability in the future,” the company said in its filing with the Securities and Exchange Commission.

The second-largest ride-sharing service is by no means alone. Uber has also run up some serious deficits. And, like Lyft, it is waiting for the day when it will be able to eliminate the biggest drain on its balance sheet: the drivers who operate its fleet of vehicles. 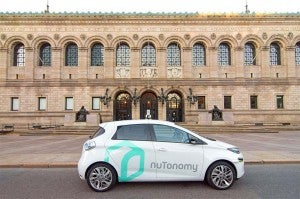 An autonomous prototype developed by nuTonomy, one of the models Lyft will begin using in Boston.

Currently, it costs close to $2 a mile for a ride-sharing vehicle, according to various studies. By comparison, drivers spend about $1.22 per mile driven – at an average 10,000 miles a year – to operate a private vehicle, noted the Boston Consulting Group in a study released a year ago. But BCG figures that operating a ride-sharing service would come to around $0.51 per mile for a fully automated and “electrified” vehicle. That changes the game, making it possible for services like Lyft to offer a ride for a fraction of what it costs to own a private vehicle.

“The economics are so compelling,” once you eliminate what ride-share drivers now make, the vast majority” of what a customer now pays a service like Uber, said Justin Rose, one of the co-authors of that BCG study.

Going public would help Lyft raise some of the money it needs to develop its autonomous vehicle technology, no minor expense. Based on its filing with the Securities and Exchange Commission it could generate about $100 million in new capital.

It could also serve as a bellwether for the IPOs expected to follow in the emerging mobility services field. Uber has been delayed in its own plan to go public due to a series of problems, including the ouster of its founder and long-time CEO Travis Kalanick. Others like to follow include General Motors’ Cruise Automation subsidiary and Waymo, the spin-off of Google that launched the world’s first autonomous ride-sharing service last December. Waymo One is currently operating in the Phoenix area but is expected to expand into as many as 20 other cities over the next several years.

Waymo is rolling out a mixed fleet of Chrysler, Jaguar and Nissan vehicles it is converting to run autonomously. But, for the moment, it is also using human “operators” as backup in case of an emergency. John Krafcik, the service’s CEO, has been a big proponent of autonomous technology but, in recent months, has acknowledged it may take longer than many proponents have anticipated to completely the need for a driver or backup operator.

For Lyft, that meant that even though the service is gaining traction, doubling its revenues to $2.2 billion last year, it also saw its deficit increase by nearly a third, to $911 million, from $668 million in 2017. All told, it has posted $2.3 billion in red ink over the past three years.

Lyft has been able to make gains at its chief rival’s expense, Uber not only hammered by the departure of its founding CEO but by a variety of legal and other issues that have repeatedly embarrassed the company and even led to a social media campaign to drive away business. Lyft, which was founded in 2012, three years after Uber, saw its share of the ride-sharing market surge to 39% at the end of 2018, up from 22% three years earlier. But the two companies have been engaged in aggressive marketing campaigns that have driven down revenues and led to even worse deficits, despite growing business.