Picture implies a new shape for the new model. 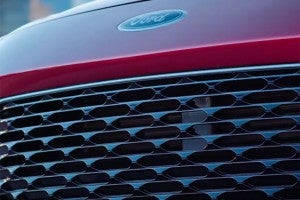 Ford offered a tease of what the new 2020 Escape looks like ahead of the New York International Auto Show next month.

Ford is readying to roll out the next-generation Escape small utility at the New York International Auto Show in a few weeks, but decided to provide a teaser photo of what the new model looks like.

Unfortunately, the shot doesn’t provide much other than a look at a revised grille that borrows its design from the other newly redesigned members of the Ford SUV family. The hood looks a bit more rounded as well and when those two items are taken into account, one can expect a significantly new look.

The Dearborn, Michigan-based automaker didn’t provide any more details, but it has been either freshening or redesigning its sport-utilities during the past two years as it moves away from passenger cars – Mustang excepted – to a utility-only line-up.

The Expedition and EcoSport made their debuts as 2018 models while the Edge and Explorer are bowing as 2019 models. The new Escape is new for 2020.

As for what we can expect out of the new model, changes tend to be evolutionary rather than revolutionary these days. The new model is likely to offer two gasoline-powered engines, as it does now, and a hybrid model.

In the meantime, we’ll need to wait until everyone heads to the city so nice they named it twice.