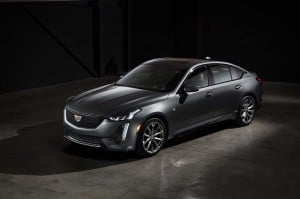 Hoping to rebuild momentum for its struggling turnaround strategy, Cadillac has been putting a premium on SUVs, rolling out new models like the XT4 and XT6 this past year and preparing to upgrade the older XT5 and Escalade models, as well.

That’s a logical move, considering utility vehicles now dominate the luxury car market. But General Motors’ flagship brand isn’t abandoning its more traditional product family. The CT5, the new midsize sedan that will be replacing the old CTS, is making its debut today through a broad social media campaign it is calling a “Sensory Symphony,” ahead of its more formal appearance at the New York International Auto Show next month.

“We’re very much committed to sedans. Let me clear the air about that,” said Caddy President Steve Carlisle said during a media background briefing.

(For even more on Caddy’s SUV and EV strategy, Click Here.)

The CTS was the car that launched what was dubbed the “Cadillac Renaissance” back in 2002. It introduced the world to the brand’s “Art & Science” design language and brought in a flood of new buyers who might have otherwise been drawn to luxury imports. But the latest, third-generation model, launched during the 2015 model-year, has struggled in the marketplace. 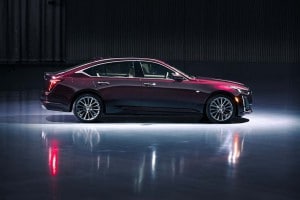 The CT5 will be offered with both 2.0- and 3.0-liter turbo engines, as well as all-wheel-drive.

While Carlisle acknowledged that Cadillac must depend on utility vehicles like the new XT6 to carry more and more weight, the hope is that the CT5 will be able to draw back buyers who like the more aggressive looks of a traditional, “three-box” sedan. They remain particularly important in China, a critical market for Caddy, and a place where sedans remain a popular body style among luxury buyers.

As with other recent models, Cadillac’s new four-door opts for a more sculpted take on the Art & Science design language. CT5 is more rounded than the older versions of the CTS, with a sweeping, almost fastback-style roof. There are still some familiar creases, such as the shoulder line that links head and taillights, as well as the folds on the hood that create a “power bulge.” The LED daytime running lights, meanwhile, retain the vertical lamp theme that has become a Cadillac trademark.

“The sedan becomes a driver’s car,” said Andrew Smith, Cadillac’s global design director. “It’s got great proportions, it’s really, really wide. Like the XT6 (SUV) it has an aggressive front for the sport version” with all black instead of chrome accents.

The overall look is wide, bold and aggressive and it’s in keeping with what Carlisle said will be an increasing emphasis on performance. Initially, there will be two engines available, a 2.0-liter turbo-four and a 3.0-liter turbo-six, but observers expect that Caddy will add a V-Series variant in the next several years. It has several engine options available for that package. 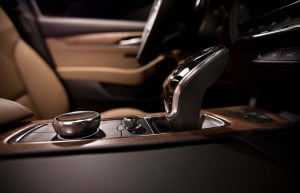 The two engines will share a 10-speed automatic transmission and buyers will be able to opt for all-wheel-drive. It’s expected there will be a performance mode that can offer torque vectoring on the CT5 Sport. That helps steer an AWD model through the corners more aggressively.

That should help attract a more youthful audience, Cadillac is betting on a shift in its marketing efforts. While it is returning to the PGA with a new sponsorship, it also had a high-profile presence on the recent Academy Awards. And it reached out to the young and hip on Monday with the debut of the “Sensory Symphony” social media campaign.

Cadillac claims this isn’t just another series of online pitches but something that relies on what is called “autonomous sensory meridian response.” More mercifully shortened to ASMR, it relies on hyper-realistic visual and sound imagery – such as the crackling sound of a cigarette burning – to more deeply engage the viewer.

“The Cadillac CT5 is meant to overwhelm all of the senses, and that’s why we’re using ASMR-style videos to showcase its features,” Deborah Wahl, Cadillac’s chief marketing officer, said in a media statement. “The ‘Sensory Symphony’ videos are designed to convey for viewers the same satisfying feeling that arises from driving this car.”

(Click Here for a look at the new Cadillac XT5 sport-utility vehicle.)

The launch of the CT5 continues Cadillac’s plan to roll out a new or completely updated model every six months through the early part of the coming decade. That campaign will include the debut of Caddy’s first all-electric model in the “2020-ish” timeframe, Carlisle told TheDetroitBureau.com last week. That battery-SUV will be the first to use an all-new, skateboard-like “architecture” that eventually will be shared with the rest of the GM global brands. Caddy itself plans to roll out a wide assortment of battery-electric vehicles. 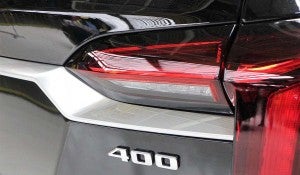 Cadillac is adopting a new badging system that will promote the vehicle's torque rating.

“It’s not unlike what we’re doing with (gas-powered products) now, with a new model coming every six months,” said Carlisle. Initially, Caddy’s all-electric models will “overlap” its gas-powered line-up but those battery-electric vehicles, or BEVs, will begin to replace conventional models “in the middle of the 2020s and accelerate from that.”

The coming EV era is one of the reasons why Cadillac also will begin modifying its alphanumeric naming strategy. Going forward, new models will add a three-digit numeric reference to their torque, rounded to the nearest 50. One version of the newest XT6, for example, will be called the XT6 400. The figure might confuse Americans, as it will be based on the global standard newton-meters, rather than the pound-feet designation favored in the States, but that fits Caddy’s increase presence in China and its goal of again becoming a global player. (Those 400NM, incidentally, equal 295 lb-ft.)

Turbo models will carry a “T” designation, perhaps 400T, and Caddy has another letter in place for electric models, though it won’t say what that is yet. The approach makes sense, Carlisle suggested, considering the gobs of torque electric vehicles produce. And even with conventional engines, displacement has become less relevant with turbocharging, one reason European brands like BMW and Mercedes-Benz often use numeric designations reflecting what an engine would displace if it didn’t have a turbo.

We’ll get a first look at the new naming strategy in the months ahead as Caddy brings out several new models, including the CT4 replacement for the current ATS model. The automaker will continue to reveal a new “Sensory Symphony” video each week through the CT5’s official launch in the Big Apple on April 16.