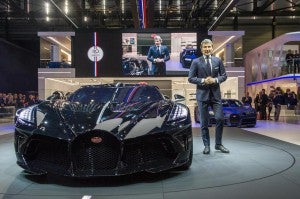 Bugatti's Stephan Winkelmann reveals the most expensive production car ever made: the $19 million La Voiture Noire.

Bugatti needed a way to mark its 110th anniversary. So how does a French sports car brand known for its luxurious, powerful and ohmigosh expensive vehicles celebrate? By building the most expensive new car ever made: La Voiture Noire.

“The true form of luxury is individuality. ‘La Voiture Noire’ is now at the cutting edge of automobile production. It is a sculptural beauty with unique technology, the ideal grand tourisme,” said Bugatti President Stephan Winkelmann.

This is a coupé with the comfort of a luxury limousine and the power of a hyper sports car, he added. That special, one-off hypercar hit the show floor at the Geneva Motor Show with a price tag of $19 million … and it was already paid for. 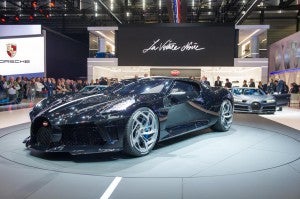 La Voiture Noire was designed to mark the 110th anniversary of Bugatti.

There is a rumor that Volkswagen Group chairman Ferdinand Piech bought the car, but that is just rumor at this point. VW is Bugatti’s parent company.

Like the car that inspired it, La Voiture Noire features an extended front end and the distinctive Bugatti C-line. The bumpers are smoothly integrated into the body and the windscreen flows seamlessly into the windows at the sides like the visor on a helmet, the company says.

“Without any irritating lines, the surface is “all of a piece” and there is nothing to disturb the optical flow. This means that the hyper sports car has changed its attitude and become a grand tourisme – ideal for comfortable travel on long trips,” the company says.

“Every single component has been handcrafted and the carbon fibre body has a deep black gloss only interrupted by the ultrafine fibre structure. This is a material that has been handled perfectly,” said Bugatti designer Etienne Salomé. “We worked long and hard on this design until was nothing that we could improve. For us, the coupé represents the perfect form with a perfect finish. 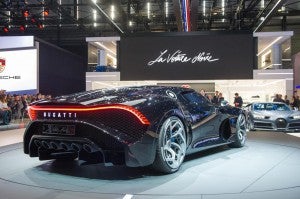 Comfort is important, but it’s the powerplant that really makes a Bugatti special and the engineers didn’t skimp on this beast. The company says the six-tailpipe hypercar represents the pinnacle of Bugatti’s production capabilities. It boasts an 8.0-liter, 16-cylinder engine that puts out 1500 brake horsepower.

La Voiture Noire is one of two vehicles the company is commemorating the 110thanniversary of Bugatti with. The other – the Chiron Sport “110 ans Bugatti” – was also on display in Geneva.In addition to all the benefits of a Chiron Sport, it not only includes the “Sky View” option as standard equipment, but also several product features only offered for this model. This edition, limited to 20 units and with a net price of 3 million euros, has already sold out as well.

“The new edition of the Chiron is not only extremely exclusive but also a sincere tribute to France,” Winkelmann said. The Chiron Sport “110 ans Bugatti” features the French tricolor “le Bleu-Blanc-Rouge,” with its colors of blue, white and red on several parts of the bodywork and in the interior.