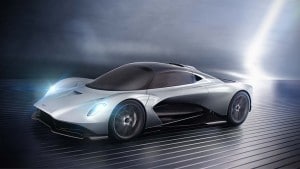 After weeks of teasing its new hypercar, Aston Martin has finally pulled the wraps off the AM-RB 003 at the Geneva Motor Show, and it’s a high-tech hybrid that also happens to be insanely fast, its 1,000 horsepower drivetrain able to launch from 0 to 60 in less than 3 seconds.

The AM-RB 003 picks up where the earlier Valkyrie left off, “incorporate(ing) concepts and technologies taken directly from F1,” the automaker explained as it prepared to reveal the two-seater at Geneva’s PALExpo convention center.

The limited-edition model is the third mid-engine offering developed as part of a “long-term collaboration” and “extraordinary journey” pairing Aston with its Formula One partner, Red Bull Advanced Technologies, noted the British automaker’s CEO Andy Palmer.

Aston is keeping some of the details of the AM-RB’s powertrain under wraps for now, but it confirmed it will be a hybrid-electric system paired with a turbocharged V-6. It is likely based on the KERS, or Kinetic Energy Recovery System, developed for F1. 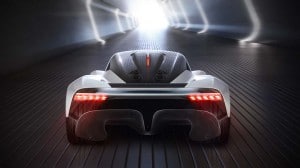 The hypercar uses a new type of active aero to reduce drag, weight and turbulence.

The decision to go with a battery-based drivetrain is no longer a shock for fans of ultimate performance. We first saw the hybrid approach with the La Ferrari, Porsche 917 and McLaren F1. Lately, the line-up has expanded to include monsters like the 2,000 hp Rimac Concept Two and 1,900 Pininfarina Battista. And there’s a wave of new hybrid and all-electric models debuting in Geneva this year, including the battery-electric Hispano Suiza Carmen.

Aston, itself, is putting increasing emphasis on electrification and is also showing of the pure electric Lagonda All-Terrain Concept in Geneva, a prototype of the all-electric Lagonda SUV expected to reach showrooms a year from now.

Everything about the AM-RB takes a high-tech approach. That includes the hypercar’s active aerodynamic technology. The FlexFoil system – developed by a company called FlexSys – “allows for the car’s downforce to be changed without changing the physical angle of the entire element,” the automaker explains, adding that FlexFoil eliminates the turbulence and added drag normally created by movable wings.

Overall, one might initially mistake the AM-RB 003 for the earlier Aston Martin Valkyrie, but a closer look reveals unique lighting, front and rear, as well as active aero elements. 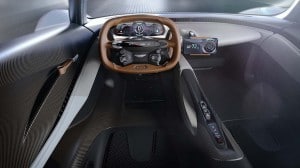 The interior includes a wheel-mounted screen and an infotainment system that relies on a motorist's own smartphone.

There’s also a big difference in cockpit design, the 003 making “greater concessions to usability and comfort,” Aston explains. For one thing, the newer hypercar adopts LMP1-style doors which swing forward, taking part of the roof with them, easing entry and exit. There’s a wider center console than in the Valkyrie, and more space for luggage.

To eliminate “rim block,” there’s a display screen mounted directly on the steering column. Meanwhile, the car’s infotainment system opts for a “bring-your-own” approach, relying on drivers to plug in their own smartphones.

Aston claims to have turned to state-of-the-art modeling and engineering systems to pull the AM-RB 003 together. And it’s using some intriguing methods to minimize weight, always an important target for a performance car. That center console, for example, is 3D-printed. Meanwhile, the four headlight elements in the hypercar weigh less than a single light assembly on the Aston DB11.

We’ll expect to hear more about the Aston Martin AM-RB 003 as it moves closer to production. All told, the automaker says, only 500 customers will actually get to buy one.