New Model Y to be offered in four distinct versions – but economy buyers will have to wait.

The Tesla Model Y is likely to look quite familiar to fans of the earlier Model 3 sedan.

The long-awaited Tesla Model Y made its formal debut on Thursday night, with CEO Elon Musk declaring it takes an already attractive line-up and makes it “S3XY.” The inside joke adds the new electric SUV to the automaker’s existing line-up of Models S, 3 and X.

But there’s a serious side to the launch. Tesla continues to struggle to right its balance sheet, plunging back into the red this quarter after earning money during the second half of 2018. The Model Y is expected to become Tesla’s best-seller, Musk declared, telling his audience “we’ll do more Model Ys than S, X and 3 combined.” And that includes not just the U.S. but also China, where Tesla is struggling to get a foothold in the world’s largest market for battery-electric vehicles.

The Model Y will be one of the vehicles Tesla plans to produce once it opens up a new plant in Shanghai later this year. That will give it a way to hold costs down and also to sidestep any escalation in the U.S.-China trade war.

(Here’s our Model Y preview. Click Here to see how close we came.)

The Model Y has roughly the same exterior footprint as the Model 3 sedan and Musk earlier this year said “three-quarters of Model Y parts are common with the Model 3 so (investment in the vehicle) are much lower.” That should help the company also deal with the issue of producing the new entry. Tesla went through what the 47-year-old CEO called “production hell” during the first year after the July 2017 launch of the Model 3 and hopes to avoid repeating that problem. 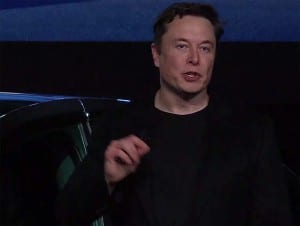 It was a virtual lovefest for CEO Musk as he rolled through Tesla's history before revealing the Model Y.

Manufacturing, Musk said Thursday night, is “insanely difficult. It’s 100 times harder to design the manufacturing system than the car itself.”

Along with the Shanghai plant, Tesla will produce the Model Y in the U.S. – but, as of the moment, it has not announced where and, sources tell TheDetroitBureau.com, a decision may not yet have been made. During a late January conference call with analysts, Musk said Tesla might not have the space and capacity to build the SUV at its Fremont, California plant and may instead add an assembly line at its Gigafactory battery plant in Reno, Nevada.

There are a number of details notably left out of Musk’s Thursday night presentation at the Tesla design center in Los Angeles, including what battery packs will be available for the Model Y. But as the new vehicle will share the same basic “architecture,” or skateboard-like platform as the Model 3, it is expected to eventually offer a range of battery options from 50 to 75 kilowatt-hours.

That would fit in with the fact that it will eventually offer four different versions of the Model 3:

All but the Standard Range Model Y will go on sale in autumn 2020, with the base entry not ready until spring of 2021.

Among the options that will be offered for the Model Y will be a seven-seat configuration. The electric SUV will come with Autopilot and Musk repeated an earlier advisory that Tesla expects to update the system to make it fully autonomous later this year. The carmaker hasn’t offered full details on what that translates into, however. Musk did note that regulatory approval will be required.

(Tesla now selling $35K Model 3;, but online only. Click Here for the story.)

For those who might have expected the Model Y to be a downsized version of the current Tesla Model X SUV, there will be one critical difference. It won’t share the “falcon wing” doors that were one of the most distinctive features on Tesla’s first sport-utility vehicle. But the upward-opening portals have been a technical nightmare. They forced Tesla to fire the original door supplier and then caused much of the nearly two-year delay in bringing Model X to market. Since then, they’ve been the source of ongoing quality and reliability problems, a key reason influential Consumer Reports rates Model X so poorly. 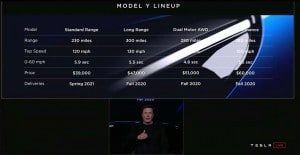 Despite Musk’s optimist sales forecast, Not everyone is as confident. Volkswagen this week boosted its forecast for its battery-electric sales by 50%, to 22 million, during the next decade. Its Audi brand said it will have 30 all-electric models in showrooms around the world by 2025, starting this spring with the roll-out of its first BEV, the e-tron SUV.

Jaguar already has the I-Pace in stores, and there is a growing list of mainstream offerings, such as the new Hyundai Kona and Chevrolet Bolt. The competition is uniformly shifting to long-range models, as Kia will do with the 2020 makeover of the Soul EV.

“This will be the first time a Tesla vehicle will face serious, direct competition,” said Edmunds Executive Director of Industry Analysis, Jessica Caldwell, “and thanks to the quality issues and scandals over the last year, the brand’s halo has started to dull. Even though the Model Y will debut with promises of grandeur, if there are any chinks in Tesla’s brand armor, this vehicle will expose them.”

For his part, Musk said he welcomes and encourages the increasing competition Tesla faces.

“Our goal, all along, has been to try to get the rest of the industry to go electric,” he said, adding that it is “it’s extremely rewarding to see” that begin to happen.