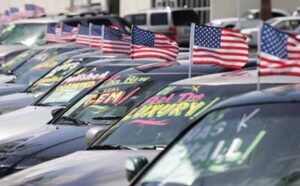 U.S. new vehicle sales are expected to fall 2.1% in March compared with the year-ago period.

U.S. auto sales were predicted to fall this year, and due to bad weather, lower-than-expected tax refunds and some mixed economic inputs, March auto sales are expected to help ensure that prophesy comes true.

New vehicle sales will drop 2.1% this month compared with year-ago results, according to industry consultants J.D. Power and LMC Automotive. The pair are forecasting total U.S. vehicle sales of about 1.56 million units in March.

“This is the first time in six years that Q1 sales will fall short of 3 million units. While the volume story could be better, there is remarkable growth in transaction prices, with records being set monthly,” Thomas King, senior vice-president of the data and analytics division at J.D. Power, said.

Lower-than-expected tax refunds are one of the reasons that new car sales are expected to fall in March.

Although automakers are selling fewer new vehicles this year, they’re making more on each sale. The average transaction price for new vehicles is tracking to hit $33,319, which would be the highest ever for the first quarter. It would also be more than $1,000 higher than compared to the same period a year ago.

The used vehicle market, according to Edmunds.com, is expected to hit a record of more than 41 million units in 2019, after setting a new record last year of 40.2 million. What’s driving trend? Increased prices on new cars is making them less appealing, plus the interest rate hikes – nearly 17% year-over-year are pushing folks out of the new car market.

(Best Bets for 2019? Click Here to see which models the Car Book recommends.)

On top of all that, according to Edmunds.com analysts, the industry is expecting a record number of lease returns this year will give shoppers more options than ever in the used market.

Used vehicle sales are on the rise and appear likely to set a new record again in 2019.

“But now we’re seeing new vehicle sales fall while used rise, indicating the market has reached a flash point. New cars are getting so expensive that they’re out of reach for many car shoppers, but there are so many more affordable used vehicles coming off lease that the market is naturally shifting in that direction.”

(One of nine pickups earns top ratings in IIHS crash tests. Click Here for the story.)