The union representing auto workers in Canada is expanding its call for a trans-Canadian boycott of GM vehicles built in Mexico by advertising during the Super Bowl, traditionally one of the high points of the year for automotive advertising.

Unifor, which was formerly known as the Canadian Auto Workers union or CAW, is fighting to block General Motors’ plan to shut down an assembly plant in Oshawa, Ontario.

Jerry Dias, president of Unifor, tweeted this week that the union has prepared a special Super Bowl ad as part of its ongoing fight to upend GM’s plans to close the Oshawa plant, which currently employs 2,500 Unifor members. The site of the plant outside Toronto has built vehicles for more than a century.

“Unifor to debut new TV commercial on @Superbowl broadcast to promote call for consumers to sign online pledge to boycott @GMvehicles made in Mexico if @GMCanada does not #SaveOshawaGM,” Dias tweeted.

(Uniform boycott of GM in Canada making an impact. Click Here for the story.) 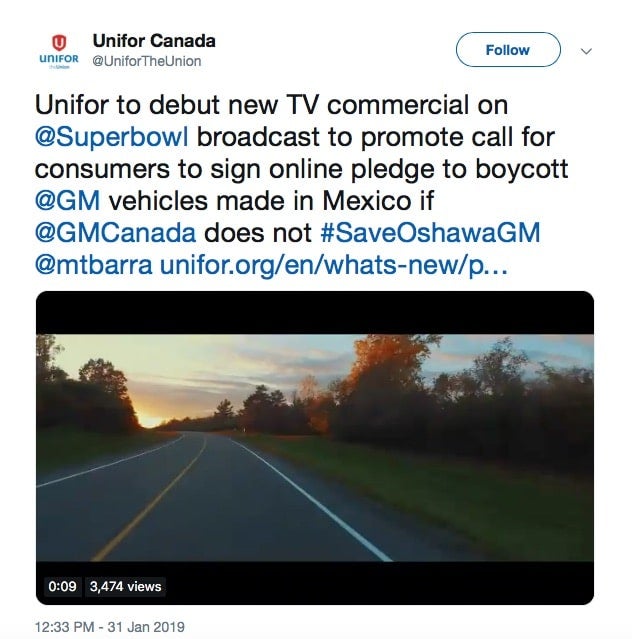 The 30-second anti-GM spot will only be seen on the Canadian Broadcast of the Super Bowl, which does leak across border into some metropolitan areas in the U.S., such as Detroit.

Canadians are protective of the country’s culture and using a practice known as “simultaneous substitution” Canadian broadcasters pay for the rights to broadcast high-profile content such as the Super Bowl, the Oscars and other major events, and monetize by selling ads to specifically targeting Canadians.

Canadian media reports, however, that Canadian viewers of Super Bowl have complained for years about the practice, because it forces them to miss out on U.S. ads made specifically for the show, most of which are innovative and well-done routinely cost millions to produce.

(Click Here for details about Oshawa workers walking out on strike.)

But Canadian broadcasters have long defended the practice, noting that the only way to justify the exorbitant costs of the broadcast rights is to sell ad space. None of the money raised by U.S. broadcasters from American ads goes to the Canadian rights holder, and vice versa, according to the CBC.

Automakers lined up to set big advertising spots in motion on the telecast of Super Bowl LIII on February 3, include Audi, Dodge, Hyundai, Jeep, Kia, Mercedes-Benz, Ram and Toyota. Ford traditionally buys spots immediately before the game and General Motors usually airs a spot during the post-game show, which isn’t as expensive actual telecast. Carmakers also run different ads on the Canadian telecast.

Dias said Unifor is prepared to spend to spend millions of dollars on its advertising campaign in Canada and the U.S., consisting of high-profile time slots on TV, as well as ad buys in newspapers and radio.

Last month, GM of Canada rejected Unifor’s proposals that would have kept the plant open and Dias responded by escalating the campaign by adding a call for boycotting GM’s Mexican-made products. GM is now officially the largest builder of vehicles in Mexico and almost all of the production from its Mexican plants is shipped to the U.S. or Canada.