Tesla Out of Cheaper Model 3s, Stakeholder Cuts Share in Half 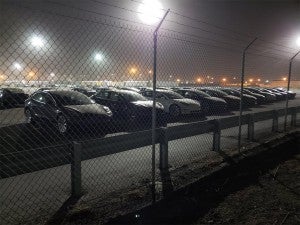 The mad rush to blow out Model 3s at the end of the year has left Tesla with very few Model 3s to deliver.

Tesla CEO Elon Musk recently said that the company would face some stiff headwinds in the early part of this year, and now some of those issues are now coming to light … as are the consequences.

The company’s last recent round of layoffs were unexpected, but were initially seen positively as analysts suggested the company would need to find ways to cut costs. However, according to Reuters, one of the teams that were cut significantly should have raised alarm bells sooner.

The group’s numbers were cut because there were no more Model 3s to deliver. The end of the year rush to push the mainstream entry out the door before the $7,500 tax credit dropped to $3,750 resulted in the company’s stock of pricey Model 3s to be drained.

Since there were no more cars, there was no more need for delivery people. However, if there are no more cars, and all of the orders for the high-priced models are nearly filled, where will the company’s revenue come from?

The company has attempted to draw more buyers with two price cuts in recent months, but that has only gotten the bottom-end price of the Model 3 down to $42,900, which is not close to the $35,000 Musk promised when the vehicle was introduced in 2016.

Chief Executive Officer Elon Musk tweeted that the company is “doing everything we can” to drop the Model 3 base price to $35,000, without credits. “It’s a super hard grind,” he tweeted.

On top of that, there are rumors that further job cuts are to come. One former employee told TheDetroitBureau.com that he is being flooded with requests by potential job-seekers who believe another round of cuts is coming.

Just as this came to light, one of Tesla’s largest investors, cut its stake in the Palo Alto, California-based company in half. T. Rowe Price today revealed in a regulatory filing that it cut is stake from 10.12% to 5.2%.

The international money manager owned 8.98 million Tesla shares at the end of last year, according to a filing at the Securities and Exchange Commission. The Baltimore-based fund group reported in a prior filing that it owned 17.4 million shares as of Sept. 30. T. Rowe Price made no comment about the move.