Those pesky hamsters would approve – but where are they? 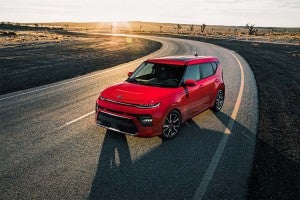 Ever since the third-generation Kia Soul made its debut at the Los Angeles Motor Show last November we’ve been waiting to hear from those hip-hop hamsters that have been an integral part of the marketing effort for the quirky crossover since it was first introduced back in 2013.

The gen-3 Kia Soul will now be offered in a dizzying array of different configurations, including a new, battery-electric version set to appear later in the year. To get a sense of what Kia has come up with, we headed out to San Diego for a long day’s drive of two of the most interesting versions, the Soul X-Line and Soul GT.

Think back six years ago and you may recall that boxes were big. Honda initially scored a solid hit with the Element, and the xB was the primary reason for Scion’s existence. Nissan had also weighed in with the Cube. 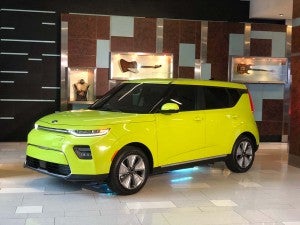 Today, “We’re the last man standing,” boasted James Bell, the lead U.S. spokesman for Kia, during a background briefing, as we prepared to head out onto the road. That was more than hyperbole. Kia really is the only one left in that idiosyncratic niche, and we could write a piece for the Harvard Business Review trying to explain why.

Yep, those iconic hamster ads certainly got everyone’s attention. But what they saw had a surprisingly universal appeal. Rather than just hip-hoppers, the Soul has been a magnet for buyers from just about every demographic, young and old, and even among cohorts who accord something far more expensive.

To start with, there’s the distinctive design, heavily influenced by Peter Schreyer, now the global styling chief at Hyundai-Kia Motors, and previously the man who helped make Audi a design leader. That said, Soul might have been a one-shot wonder, as was the case with the xB. The difference is that while Scion’s second-generation box grew fat and flabby, Kia has managed to retain the basic shape and look of the original.

Not to say it hasn’t changed a bit. The Korean carmaker hasn’t fallen into the trap of refusing to update things. The 2020 Kia Soul adds 1.2 inches in wheelbase and 2.2 inches in length – but width remains 70.9 inches. But you’d not know to look at the crossover which retains the same visual balance as the original. It’s only when it comes to interior passenger and cargo space that the added inches come – positively – into play. 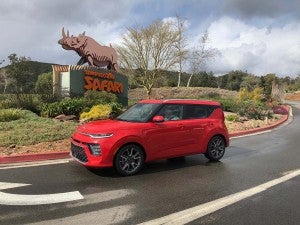 With the GT, Kia brings a turbo-four engine back into the Soul line-up.

Meanwhile, like the original, Soul strikes a balance between utility vehicle and sedan. It has plenty of headroom and a tall seating position, but it’s also easy to enter, no climbing up or slumping down to reach your seat.

The new front end is familiar, but somehow brings the design cues of the gen-2 model into harmony. There’s a broader version of the Kia brand’s “tiger nose grille,” that accentuates the width. (If only some of those supposedly wide-body Pontiacs could have done such an effective job that brand might still be with us.)

One of the more curious moves with the 2020 remake finds key front-end features are unique to specific trim levels. The X-Line, for example, mounts its daytime running lights low, with squinty headlights mounted just under the hood. The GT flips things around. It not only boasts a more aggressive front fascia, with a large, below-the-bumper grille, but it mounts its DRLs high and the headlights midway down the nose.

Around back, meanwhile, the 2020 Soul boasts a deeper, wider tailgate that conceals a larger cargo compartment with a dual-level cargo board that enhances utility. The boomerang taillights now wrap all around the tailgate’s frame, creating a bit of a cluttered look. And the decision to go with a now industry-cliché “floating roofline” leaves us a bit cold. The GT model no gets a center-mounted dual exhaust.

Overall, the new model retains its visual appeal and certainly won’t get missed, whether on the road or in a parking lot. What’s intriguing about the Soul is that this affordable little crossover manages to look significantly more expensive than you’d expect – the base LX priced at $18,485.

(To check out the all-new, three-row Kia Telluride, Click Here.) 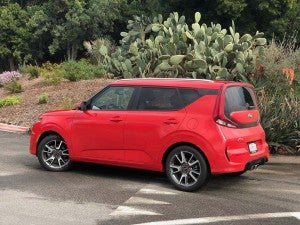 The GT features a beefed up suspension, but all 2020 Soul models have a stiffer body.

The interior has been updated in a number of ways and, again, there are some notable differences between each trim line. Not surprisingly, the GT package is the most sporty, with details like its D-shaped steering wheel.

There’s an old industry axiom: “You can sell an old man a young man’s car, but you can’t sell a young man and old man’s car.” Kia designers took that to heart and one example is the way they actually integrated the audio system into the doors. No, not just with more obvious speaker grilles but by using light strips by the door handles that pick up the beat of the music you are playing. And with the optional Harman-Kardon audio upgrade on the GT, you’ll likely want to keep the tunes going – and loud, with a full 640 watts.

The base versions of the Soul now get a 7.0-inch touchscreen controlling an infotainment system with built-in Bluetooth, as well as Android Auto and Apple CarPlay. The EX and GT trims get a 10.3-inch display that can integrate up to 10 apps that you can position as you wish.

Depending upon the model, Kia also adds a head-up display. Rather than projecting the image on the windshield, however, it picks up on an approach first offered by Mazda, with a pop-up glass panel rising out of the instrument panel from just behind the gauge cluster.

We split our day driving both the 2020 Soul X-Line and GT. The performance model is also the most expensive and well-equipped, starting at $28,485. That’s a full $1,500 more than the top-line 2019 Soul but, we quickly concluded, worth the price. 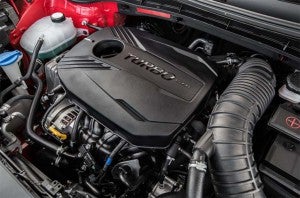 The new turbo makes 201 hp and 195 pound-feet of torque through a 7-speed DCT gearbox.

The GT is motivated by a 1.6-liter inline-four, marking a return to turbocharging for the crossover. The engine punches out 201 horsepower and 195 pound-feet of torque through a seven-speed dual-clutch gearbox. It’s plenty of power for the Soul, though we would like Kia to address the issue of a slight bit of turbo-lag. It’s by no means a deal-breaker but should be on their list of mid-cycle tweaks.

The rest of the Soul line-up is powered by a naturally aspirated 2.0-liter I-4 putting out 147 hp — not anemic, but certainly not the punch of the GT. This time around, Kia has replaced the six-speed automatic with a CVT gearbox that simulates gear changes and has much less of the tendency towards motorboating that turns us sour on most CVTs. There’s also a six-speed manual available on the base LX.

The GT offers more than just that extra horsepower. It also boasts a stiffened suspension. Considering all the work that Kia did to ensure the 2020 model has Soul’s stiffest platform and body ever, the performance model delivers some real surprises.

During a long afternoon’s driving through the hills and valleys outside San Diego, we found ourselves flogging the Soul GT around more like a sports car than an affordable crossover. It remained firmly planted, with steering precise and predictable, even on off-camber turns and wet roads. 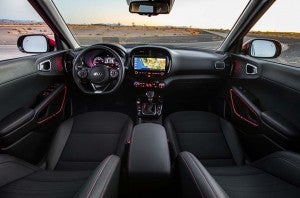 (Click Here for our first drive review of the 2019 Kia Sorento.)

And that’s without all-wheel-drive. If we had one wish, we’d ask for an AWD version of the Kia Soul though, to be honest, the front-drive package, both X-Line and GT, proved darned adept.

Fuel economy is another plus. The Soul X-Line delivers 27 mpg City, 33 Highway and 30 Combined. Surprisingly, the turbo GT didn’t sacrifice much in the way of efficiency, with the same 27 mpg around town, 32 on the Highway and 29 Combined.

Bottom line, the 2020 Kia Soul makes significant improvements were called for, and remains the same in ways that fans are likely to appreciate. There’s the reason it’s the last one standing in a once promising segment, and we think the third-generation model will only enhance its broad appeal.