Plenty of comfort and convenience with great fuel economy. 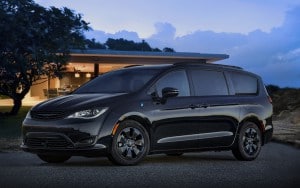 The 2019 Chrysler Pacifica Hybrid Limited features the S appearance package with blacked out wheels and other updates to make it appealing to men.

Minivans were invented by the old Chrysler Corp. back in the early 1980s and through the company’s various transitions and permeations have been a mainstay in its product portfolio ever since the Reagan years.

Facing stiffer fuel-economy and emission regulations, Fiat Chrysler Automobiles N.V. has brought on a hybrid version that has all the advantages that have made of the traditional minivan a practical choice for families or anyone that needs to carry multiple passengers of all ages to a destination in comfort and with minimal fuss.

The sliding doors on the 2019 Chrysler Pacifica Hybrid remain as practical as ever for dropping children off for school while changes to the powertrain have given it greater range and fuel economy plus FCA also has loaded up with the latest technology, including the ability to connect multiple devices to the Internet and useful driver-assistance features such as blind spot detection that help justify its $50,375 price tag, which includes the $1,395 destination charge.

The mere thought of a minivan seems to make grown men weep but overall FCA has made a serious effort to give the Pacifica a more contemporary and appealing exterior. For one thing the front end of the Pacifica has a bolder appearance and the rake of the windshield and sloping roof line give what the designers describe as a more athletic stance and help disguise the sliding doors. 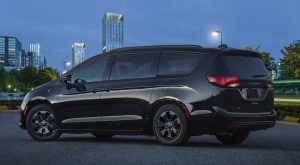 The new Chrysler Pacifica Hybrid can travel up to 30 miles in electric-only mode.

The Pacifica Hybrid Limited I drove comes with 17-inch wheels, but it is possible to order the Pacifica with 18-inch and 20-inch wheels. The rear lift gate has also been tailored to look more like the rear hatch of sport-utility vehicle.

The interior is spacious with plenty of storage and the furnishings and materials used throughout the cabin are first rate with varied textures and soft-touch finishes in critical areas. The large screen in the center stack, which features the controls for the navigation, heating, ventilation and cooling and entertainment as well as FCA’s UConnect system is easy to read even on the go and easy to use.

In addition, the driver also has separate screen in the instrument cluster to check the operation of the vehicle and the middle seats can be equipped with screens for personalized entertainment once a smart phone is linked.

The other impressive feature on the Pacifica as the ease of access to the third-row seating. Even when the third-row seats are in use, there is still a good-sized space for luggage, book bags, grocery bags or other packages under the rear hatch.

The Pacifica also is equipped with advanced driver assistance features such as adaptive cruise controls, lane departure warnings and full-speed forward collision warnings as well as multiple air bags to protect driver and passengers in the event of head on or side-impact crash. 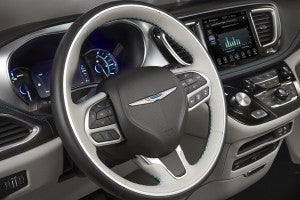 The dash on the Pacifica hybrid features two large screens that allow the driver to get quick look at the vehicle's performance as well as its infotainment and climate controls.

But despite its highly functional interior and features such as remote start and the 360-degree surround view camera that makes it easy to see what’s going on around the vehicle at critical times and parking assistance features, I thought the Pacifica Hybrid Limited also had some very impressive driving dynamics.

(Click Here to see more about Pacifica and Odyssey topping the IIHS 2018–19 rankings.)

The Pacifica Hybrid has a rock-solid feel on the road, regardless of the quality of the roadway and its ride and handling is impressive for a vehicle that traditionally hasn’t been regarded as much fun to drive. Certainly, the Pacifica isn’t built for racing, but it holds own on curves and on the freeway or from a standing start.

The weighty lithium-ion battery pack tucked down low in the Pacifica helps add to the vehicle’s stability, but I also felt the suspension was well-tuned and handled the different loads easily.

The 3.5-liter V6 engine produces 260 horsepower, which is adequate for a vehicle designed to carry heavy loads. But the power in the Pacifica is enhanced by the addition of the hybrid drive and battery pack, which power two separate electric motors. One produces 84 horsepower and the other 114 hp through the FCA’s unique electrically variable transmission. 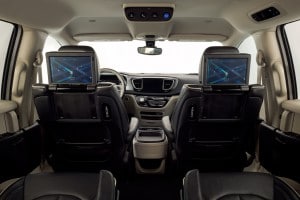 FCA’s bills the Pacifica Hybrid, the industry’s first electrified minivan and it is capable, according to the specifications, of delivering 32 miles of driving on electric power only or 82 MPGe from a 16-kWh lithium-ion battery pack as well as a 520-mile total gas and electric range.

The EPA rating on vehicle I drove was 30 miles per gallon, which matches up well with a compact SUV or crossover that doesn’t have anywhere near the carrying capacity of the Pacifica.

The 2019 Chrysler Pacifica Hybrid Limited also shows it is possible to add new dimensions to a segment that seem past its prime.  Minivans may not have a lot of sex appeal, but they remain among the most practical and efficient vehicles available for anyone that needs seat for passengers who need to get to school or anywhere else.