Company has 19 dealers signed up with more to come. 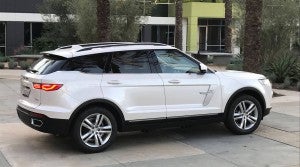 Could this be Zotye's first entry in the U.S. market in later this year? An SUV will be first, the company said.

Zotye Automotive appears poised to win the race to be the first Chinese automaker to sell vehicles in the United States as its lined up 19 dealers to push the company’s first product: an SUV.

The automaker actually sells several types of SUVs in China so given vehicle preferences there and in the U.S. the selection of a sport-ute makes plenty of sense.

Perhaps more importantly, Zotye plans to implement “no haggle” pricing for its vehicles. Those prices, according to officials, will be as much as 20% cheaper than other similar models from other brands. They’ll also be able buy the vehicles online.

They will be sold at Zotye stores of these 19 dealers, which will likely be modest spaces in their existing facilities. The dealers cover a range of brands including Ford, Lincoln, Volvo, Buick-GMC, Hyundai and Subaru.

China-based carmakers have been trying to get to the U.S. market for some time now and Zotye and GAC Motor were the presumed favorites to arrive first. However, GAC officials announced at the North American International Auto Show in Detroit that they would not be ready until 2020 to sell vehicles in the U.S.

Zotye officials haven’t confirmed what model they’ll be bringing over, only suggesting that engineering and development work on the vehicle is “currently underway.” Zotye’s U.S. representative suggested that it will send its T600 model over to the U.S.

The company not only has 19 dealers signed up, Zotye USA is headquartered in Lake Forest, California. According to Automotive News, that happened after two years of negotiations with HAAH Automotive Holdings, which signed a distributorship deal with company.

Led by CEO Duke Hale, whose background includes Volvo, Mazda and Jaguar, the company hopes to enter the top 80 markets in the U.S. This would result in as many as 325 sales points and sales of a Chinese-made crossover by the end of 2020.

(Chinese automaker Zotye planning to sell vehicles in U.S. by 2020. Click Here for the story.)

“We’re going to change the experience for the customer, and we’re going to do it through dealers,” Hale told Automotive News.

Thanks for subscribing! Please check your email for further instructions.
Tagged with: Chinese-made cars sold in US | TheDetroitBureau.com. | Zotye T600 | Zotye US sales plans | Zotye USA | Zotye first Chinese maker to sell in US | Zotye news | Zotye selling vehicles in US in 2019 | Zotye to sell CUV in US | auto news | michael strong | thedetroitbureau