Officials say they've done it before, they can do it again. 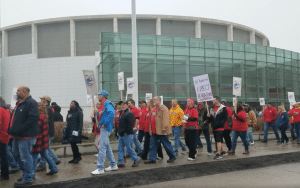 The UAW protested before and during the annual NAIAS Charity Preview, in hopes to changing GM's opinion about the plant closures.

The United Auto Workers has succeeded in reversing plant closing decisions in the past and union leaders believe they can pressure General Motors Co. into reversing its decision to close factories in the United States and Canada.

Frank Stuglin, a member of the UAW’s executive board from the region in which GM plans to shutter two plants, said in an interview Friday night during a union rally outside the “Red Carpet” Charity Preview for the North American International Auto Show in Detroit, the union has succeeded in the past in reversing plant-closing decisions by GM and Chrysler.

“We kept open the plants in Orion Township, Michigan, and in Sterling Heights, Michigan, when they were supposed to close,” said Stuglin, referring to the plants the UAW succeeded in protecting even after they were ordered shut during the 2008-09 recession.

The union certainly could do it again in the case of the Detroit Hamtramck or Warren plants in his region or the plant in Lordstown, Ohio, or Baltimore, Maryland, Stuglin said.

“GM is making millions of dollars,” said Stuglin. “They should stop chasing a nickel around the world,” he added as he addressed the crowd of about 500 people gathered outside Cobo Center for a brief rally and march to the doors of the auto show.

The crowd included union representatives from Lordstown and from Oshawa, Ontario, where the Canadian union is fighting to block the shutdown of one of two Canadian assembly plants. “We signed a contract in 2016 in which they promised to keep the plant open until 2020,” said Tony Leah, who came down for the rally with contingent from Toronto.

“GM won’t listen to moral arguments or to reason. But I don’t think they’ll listen if the know they’re in for the fight of their life,” said Chuck Browning, another member of the UAW’s executive board from Michigan

Rich Rankin, another member of the UAW executive board from Ohio, said General Motors is ignoring the impact that the shutdown will have on families of workers, who are being asked to move away from their homes to work in plants hundreds of miles away. “GM is putting profits before people,” Rankin said. “We know we’re in a war.”

Dave Parnell, a member of UAW Local 22 from the soon to close Detroit-Hamtramck plant, said people from his plant are already being transferred up to Flint to a GM Truck plant. “We also have people who have gone to Spring Hill, Tennessee,” he added.

Dave Green, president of UAW Local 1112 in Lordstown, Ohio, said shutting down a plant such Lordstown has a tremendous impact on the local community even if all the union members are placed in other GM plants. The shutdown of Lordstown will also eliminate thousands of jobs across the state of Ohio, said Green, who said the best way to block GM’s decision is organize a boycott of any vehicle that GM imports.

“We don’t want a handout. We want to keep working,” said Green.

During the demonstration, union members were joined by members of the Detroit Coalition for a Green New Deal, which is also pressing to use the plants for products that would cut down on the release of greenhouse gases and slow climate change.

The coalition is specifically calling for public hearings on the fate of the Detroit-Hamtramck or Poletown plant, which was erected in the 1980s after the City of Detroit used eminent domain to clear away hundreds of homes and businesses to create site for the plant. Part of the site also belong to Dodge Main. Suglin noted the Warren Transmission plant also has a storied history, having served as a defense plant.

“GM must honor its labor contracts and its legal and moral commitments to the places in which it has done business,” said organizers of the coalition, which includes community groups from throughout the Detroit area.

John Neal, a city councilor from Oshawa and retired GM workers, who participated in the demonstration outside the auto show, said plants closing has a devastating impact on any community. “GM is big part of our budget. But we’re also worried about what happens to all the property they own,” Neal said.