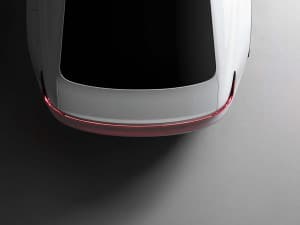 Polestar hints that its first all-electric model will adopt a "fastback" shape.

Volvo’s electric performance division is finally charging forward, the plug-in hybrid Polestar 1 getting ready for production, while the sub-brand’s first all-electric model is set to be “fully revealed in the coming weeks,” it confirmed today.

According to a statement, “The car will go into production shortly after the long-range hybrid Polestar 1, which will enter production later this year.” The automaker also emphasized that Polestar 2 will take direct aim at Tesla’s Model 3.

The teaser shows an overhead view of the Polestar 2’s rounded back end, so not much to go on beyond the fact that it features very aggressively raked rear glass flowing into a rather short trunk lid. That would suggest either a hatchback or an edgy crossover design, Polestar calling it a “fastback.”

We expect to start hearing lots more about Polestar 2 in February, leading up to its formal debut at the annual Geneva Motor Show. Here are a few key details that the Volvo performance brand is already confirming: 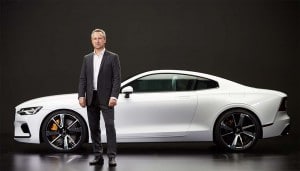 The Polestar 1, a plug-in hybrid, made its Geneva debut last winter.

Perhaps the most significant detail in the short release. Polestar says its first BEV “Will be sold in the Tesla Model 3 price range,” which would seem to suggest something on the order of $45,000 to $55,000. (That considering it is questionable whether Tesla ever will actually produce the promised $35,000 Model 3 package.)

Also significant, Polestar says it will focus on marketing the BEV by subscription, similar to the approach Volvo pioneered with its XC40 model. The approach, it says, “will be a slightly more premium version of our sister brand’s Care by Volvo package, although we will honor/take cash sales.”

You can expect to see a very high-tech product, inside and out. In fact, Polestar 2 will feature what the brand claims will be the “world debut” of the new Google Android HMI, the in-car version of Google Assistant, the tech firm’s personal voice assistant.

The industry, as a whole, is rapidly moving beyond the primitive voice technology that has become a requisite over the past decade. Mercedes-Benz recently launched its own system, MBUX, on the new A-Class, and BMW’s take on the technology will be found in the new 3-Series. Volvo is one of several manufacturers working with Google, while Ford and several others are integrating Amazon’s Alexa voice assistance into their own products.

As to that “fastback” design, there are several potential options, including something akin to the Audi A7. But Polestar could surprise us.

We’ll be surprised if we don’t see and hear more even before the official Geneva Motor Show debut.