Is this the start of a “bloodbath” that will purge non-Japanese senior managers? 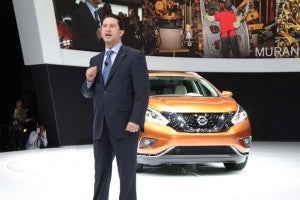 José Muñoz, a widely respected Nissan executive and a protégé of ousted Chairman Carlos Ghosn, is leaving the automaker just days after he reportedly took a leave of absence to deal with “special tasks.”

Muñoz, who had gone to Japan this week, was said to have resigned, according to Nissan, but several observers questioned whether his departure marks the beginning of a purge of senior managers linked to Ghosn. The 64-year-old executive was arrested on Nov. 19, and accused of a number of financial misdeeds, prosecutors on Friday indicting him for the second time.

“José Muñoz has elected to resign from Nissan Motor Company, effective immediately,” Nissan said in a statement e-mailed to TheDetroitBureau.com.

But not everyone is convinced of that, Joe Phillippi, a veteran auto analyst and head of AutoTrends Consulting, said, “once you get new management in, invariably things begin to shake up.” He also noted that Nissan performed worse than expected in the U.S. market last year, which could provide “an opportunity to clean house.”

(Carlos Ghosn has been indicted again. Click Here for the story.)

Nissan CEO Hiroto Saikawa, who has been unhappy with the balance of power between Nissan and Renault, is rumored to have sacked Munoz.

A former Nissan executive who remains close to the automaker was even more blunt, suggesting that the departure of the 53-year-old Muñoz could mark the start of what he termed “a bloodbath.”

Muñoz has been serving as Chief Performance Officer since November 2016, but he built his reputation as the president of Nissan Mexicana and, subsequently, head of overall North American operations where he helped drive the carmaker to record sales levels and market share.

He was considered a protégé of Carlos Ghosn but was tasked with assisting Nissan in its investigation of the chairman it ousted after his November arrest. The trade publication Automotive News quoted sources  indicating there were concerns that the Spanish-born Muñoz wasn’t being cooperative enough with the investigation which, Nissan had said was initiated by a “whistleblower.”

The trade publication also quoted from a letter Muñoz reportedly sent to colleagues in which he said that, “Unfortunately, Nissan is currently involved in matters that have and will continue to divert its focus. As I have repeatedly and recently made clear to the company, I look forward to continuing to assist Nissan in its investigations.”

Muñoz indicated to those colleagues that he had decided it was time to leave and take “some period of serious contemplation.” But sources told TheDetroitBureau.com that Muñoz likely jumped knowing that he was about to be pushed out of the company.

He was seen by some as a potential successor to Hiroto Saikawa, Nissan’s global CEO. Published reports during the last seven weeks have suggested that Ghosn had been heading to Japan to fire the CEO when he was arrested. Whether that is true or not, Saikawa has been seen as trying to consolidate his power since the crisis began.

He has also been pushing to reduce the influence of Renault. Nissan’s French alliance partner holds a 43.4% stake in the Japanese company and that has led to growing friction since it can unilaterally install members of Nissan’s board, as well as top management like Muñoz.

Following Ghosn’s arrest, Saikawa harshly declared that his former boss had cultivated “too much power,” and made it clear that he wanted to see changes in the lopsided relationship with Renault – which had saved Nissan from likely bankruptcy in 1999 with a $6 billion bailout led by Ghosn.

“I think anyone in senior management is on the (endangered) list,” said the former Nissan executive, who worked in Japan, adding, “Well, at least anyone who isn’t Japanese.”

The number of foreigners working at Nissan headquarters in Japan has declined in recent years but there are still a number of them in senior positions globally, including Denis LeVot, the Frenchman who is now serving as North American CEO.

The coming weeks will indicate whether the departure of Muñoz is a unique situation or the start of a broader shake-up.