The coupe won rave reviews when shown a few years ago. 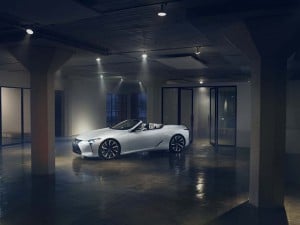 The LC Convertible Concept is a smidge longer, but slightly lower than the LC coupe.

Toyota’s luxury brand won raves when it revealed the LC Coupe concept a few years back, and generated even more praise when it translated the show car into a production model. Now, it’s hinting it could do it again, with a convertible version of the sports coupe set to debut at the North American International Auto Show in Detroit next week.

The show car manages to maintain the sleekly aggressive look of the LC coupe, with its long hood, steeply raked windshield, high deck lid – and the most aggressive version yet of the familiar Lexus “spindle grille.”

“This concept takes the unmistakable design of the LC coupe and reimagines it as a future convertible,” Tadao Mori, Chief Designer of the LC Convertible concept, said ahead of the NAIAS debut. “It blends all the best aspects of the original coupe with the dynamic design of an open-air convertible.”

Unlike the ungainly Lexus SC convertible that vanished with barely a whimper in 2010 after an eight-year run, the new LC concept eschews a foldable hardtop for a conventional soft roof that better allows it to retain the basic shape of the coupe model. 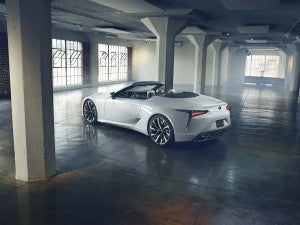 Lexus is offering some strong hints the convertible could be geared for production.

The basic dimensions of the LC concept appear virtually identical to those of the coupe, with a total length of 187.8 inches, a wheelbase of 113.0 inches, a width of 75.6 inches and a height of 52.8 inches. That works out to about 0.4 inches longer, and 0.2 inches lower, than the hardtop.

There are some distinctive details that one spots while gazing at the images of the new droptop, notably the crisply creased flying buttresses that flow from behind the headrests almost all the way to the tail of the LC Convertible concept.

(Toyota makes it official. New Supra is coming to NAIAS. Click Here for the story.)

As is the norm with a “concept” vehicle, there are a few points of exaggeration, most notably the 22-inch wheels that would all but certainly be downsized in production. But the fact that the show car has conventionally sized sideview mirrors is quite telling. That would suggest that the concept is all but ready to go into production, something very likely to happen, we anticipate, in the next year or two, at the most. 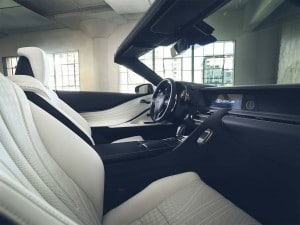 The interior picks up most of the design elements of the currrent Lexus LC coupe.

In that case, what about its powertrain? Well, there are plenty of options, but it would seem more than likely Lexus would opt for its existing engine line-up in the LC Coupe. That’s currently a 5.0-liter V-8 making 471 horsepower, as well as a hybrid drivetrain making a combined 354 hp.

We hope to find out more about future plans for the Lexus LC Convertible Concept at the NAIAS next week.

(Infiniti teases all-electric concept vehicle ahead of NAIAS. Click Here to check it out.)