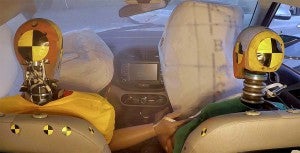 Hyundai is introducing the first-ever post-collision airbag into its new vehicles.

It can take just a fraction of a second for a car crash to occur but, in nearly a third of all collisions, at least one vehicle may keep moving, striking something a second time. These multi-collision situations can be particularly dangerous because a vehicle’s airbags are typically designed to inflate once – and then for only a second or two before beginning to deflate.

Several manufacturers have begun to address the problem, either by taking steps to reduce the likelihood of a secondary crash or, in the case of the Hyundai Motor Group, by developing airbags that can provide continuing protection after the initial collision.

“By improving airbag performance in multi-collision scenarios, we expect to significantly improve the safety of our drivers and passengers,” said Taesoo Chi, head of Chassis Technology Center at Hyundai Motor Group. “We will continue our research on more diverse crash situations as part of our commitment to producing even safer vehicles that protect occupants and prevent injuries.”

About 40,000 Americans are killed in motor vehicle crashes each year, hundreds of thousands more injured, with a disproportionate share of those in secondary crashes. Data on 56,000 vehicle accidents between 2000 and 2012 gathered by the National Automotive Sampling System Crashworthiness Data System showed 30% were involved in multi-collisions.

(Hyundai powers up with new Elantra N-Line. Click Here for the story.) 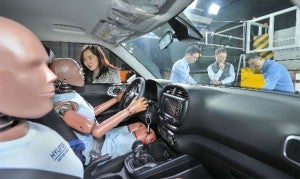 These typically occur when a vehicle strikes another vehicle or obstacle like a tree or guardrail before ping-ponging into another object. The NASS-CDS study found the most common multi-collision crash occurs when a vehicle crosses the center lane, followed by incidents at highway tollgates and median strip collisions.

One problem is that airbags may not stay inflated long enough to prove effective in a secondary crash. Another issue is that the original crash may toss vehicle occupants out of position, so they aren’t protected by airbags when the secondary crash occurs.

The Hyundai system is designed to measure what happens to a vehicle and its occupants after the initial crash and then respond more quickly and accurately when the secondary crash occurs.

The multi-collision airbags are still in the development process, according to the South Korean carmaker, which says the technology will be used on new Hyundai and Kia vehicles “in the future.” 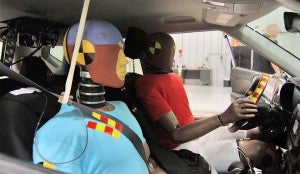 These crash test dummies are ready to put Hyundai's new post-collision airbags to the test.

Hyundai Motor Group isn’t the only automaker trying to address the multi-collision issue. Several years ago, Volkswagen added new technology designed to apply a vehicle’s brakes after an initial impact, research showing that drivers often release the brakes following a crash. That approach is design to stop a vehicle in its tracks to prevent a secondary impact.

(To see more about the Hyundai Santa Cruz pickup set to debut in late ’20 or ’21, Click Here.)

That approach is now being adopted by other automakers, including Ford which will use it on the new version of the Explorer SUV unveiled at the North American International Auto Show in Detroit this month.