Once high-flying exec may now be fired by Renault.

Approaching his third month in solitary confinement, former Nissan Chairman Carlos Ghosn has offered to wear an ankle monitor in a bid to win bail, a step Japanese prosecutors have so far resisted.

Ghosn has been held in the Tokyo Detention Center since Nov. 29, when he was pulled off his corporate jet after landing at Haneda Airport. He faces trial on several allegations of financial misconduct and prosecutors are considering other allegations. The 64-year-old executive was almost immediately fired by Nissan and its Japanese affiliate, Mitsubishi, and reports from Europe suggest he may be dismissed by their French alliance partner Renault, as well.

“I remain imprisoned in the detention centre, 64 days after I was arrested, with no release in sight,” Ghosn said in a statement issued through his U.S. representatives. “As the court considers my bail application, I want to emphasise that I will reside in Japan and respect any and all bail conditions the court concludes are warranted.”

That would include not only wearing a tracking bracelet on his ankle but hiring guards who would track his movements to ensure Ghosn does not try to flee Japan. That has been one of the concerns raised by prosecutors who have successfully been able to block requests for bail despite the official Japanese policy that calls for suspects to be detained in detention for no more than 10 days.

Ghosn now faces several trial on several allegations, including concealing nearly $90 million in income and committing other financial irregularities while serving in various capacities with the Renault-Nissan-Mitsubishi Alliance and its various members.

He has been held in solitary confinement in a cell of only around 65 square feet with little more than a tatami mat on the floor and a small table. Until early this month he faced lengthy daily interrogations and pressure to sign a confession written in Japanese, a language he does not speak. He has not been allowed to see family members and has only received visits from embassy personnel and his lawyers.

Former Nissan colleague Greg Kelly, who was released on bail last month, after his wife pleaded for his release.

That has raised concerns from critics who denounce such treatment, especially of foreigners, as what CNN dubbed “hostage justice.” Complicating matters, numerous sources have suggested to TheDetroitBureau.com that the decision to prosecute Ghosn is directly related to Nissan’s desire to reduce the level of control executed by ally Renault. The French carmaker holds a 43.4% stake in its partner and has the right to name board members and senior executives unilaterally.

It is not unusual for cases to drag on for long periods of time – as was the case with former Toyota global PR manager Julie Hamp before her release – and Japanese prosecutors claim a conviction rate of more than 90%, though some critics contend the harsh conditions leads many suspects to simply confess in the hopes of receiving better treatment.

For his part, Ghosn has been seen in public just once, on Jan. 8, briefly appearing in court in Tokyo where he pleaded not guilty. He echoed that stand in his latest statement, declaring, “I am not guilty of the charges against me and I look forward to defending my reputation in the courtroom; nothing is more important to me or to my family.” 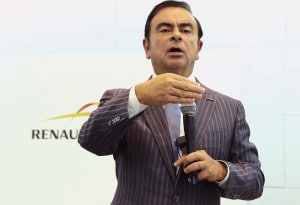 Nissan CEO Carlos Ghosn is offering to make sure he will live in Japan while awaiting trial.

Whether prosecutors or the courts might be willing to take a more favorable view on bail is uncertain, though Ghosn’s wife has weighed in with her own plea, expressing concerns for his health – the executive reportedly losing more than 20 pounds by the time he was brought before the court earlier this month. Carole Ghosn has also called for assistance from Human Rights Watch.

On Christmas Day, the court did release Ghosn’s co-defendant, former Nissan executive Greg Kelly. His own wife had issued a video plea just days before noting that the exec had been scheduled for neck surgery when he was arrested on the same plane carrying Ghosn to Japan.

Nissan initially triggered the arrests after conducting a months-long investigation launched after receiving a tip from what it described as a “whistleblower.” It is now raising further allegations, accusing Ghosn of receiving millions of dollars from an alliance umbrella organization without its approval.

The Japanese automaker’s claims have been greeted with skepticism in France, where Renault is headquartered, several government officials demanding “due process” for the executive. The government is the largest stakeholder in Renault and has, until now, resisted calls for Ghosn’s dismissal from that company, as well.

But as the Brazilian-born executive’s detention drags on that may change. Last week, Bruno Le Maire, the French Minister of the Economy, told France’s news channel LCI that, “We want a meeting of the Renault executive board in the next few days,” adding that, “We’re asking for a new long-term leadership.”

There has so far been no follow-up from Renault on a possible replacement for Ghosn.