Confirming months of rumors, Ford Motor Co. and Volkswagen announced Tuesday that they will launch the first of what they suggested will be a series of joint ventures, focusing initially on midsize pickups and light commercial vehicles.

Moving forward, they anticipate adding projects that will pair their costly efforts on electrified and autonomous vehicles, while Herbert Diess, the CEO of VW, said during a joint teleconference that the new partners could work together on “other” products in the future.

Alliances are becoming more commonplace in an industry where changing consumer tastes and emerging technologies are stretching thin the budgets of even the most well-funded manufacturers, said Diess, who added that, “In such an environment, it just makes sense to share investments, pool innovation capabilities and create scale effects that are clearly defined.”

Ford and VW have had a long history of collaboration, the German CEO noted, briefly combining their marketing and manufacturing operations in Brazil and Argentina, though the AutoLatina venture lasted less than a decade. They also produced minivans together in Europe for a number of years.

That helped the two find common ground and a comfort level quickly, said Ford CEO Jim Hackett. It also helped that the U.S. and German automakers have “complementary” strengths and weaknesses, added Diess. 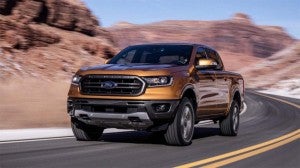 The Ford Ranger will be the base for Volkswagen's new midsize truck offering in Europe, but not the U.S.

That means pickups for Ford and electric vehicles for VW, for example. And though Ford is a dominant player in the U.S., it is struggling in Europe and China, both markets where Volkswagen is strong.

The two companies first signaled their intent to work together again last June when they signed a memorandum of understanding, or MoU, covering light commercial vehicles. In its final form, the agreement also adds midsize pickups.

During the next several years, they will consolidate efforts to develop a range of new commercial vans, such as Ford’s Transit model, with a goal of having them in production by 2023.

On roughly the same timetable, Ford and VW also will work to develop a new generation of midsize pickups. In some instances, the German carmaker will take the lead. On pickups, Ford will be the primary partner, and the platform for its Ranger truck will be used as the foundation for an all-new version of the Volkswagen Amarok.

At least initially, the VW model will be sold only in Europe, Africa and South America, not to compete with Ford in its home U.S. market.

During an hour-long teleconference, Ford and VW officials outlined what they see as the changing environment in the auto industry, one in which established players face new sorts of competition from entrants such as Tesla, the California battery-carmaker, as well as tech firms like Google spinoff, Waymo, one of the leaders in the emerging world of self-driving vehicles.

“The success of this partnership could ultimately determine the long-term fate of two of the world’s most iconic brands,” said Jessica Caldwell, executive director of industry analysis for date firm Edmunds. “Automakers aren’t just competing with each other anymore, they’re under intense pressure from well-funded tech companies who are eager to get in on the future of mobility.”

The second stage of the alliance, still under negotiation, will likely focus on those new areas of technology all but certain to define the very nature of personal mobility, including not just electrified and autonomous vehicles but ride- and car-sharing, as well. 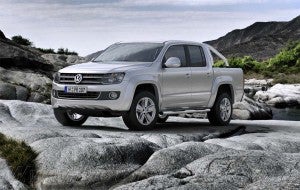 The current VW Amarok is not sold in the U.S. market but it will use the Ranger as its base in the years ahead.

The cost of developing those technologies is huge, said Diess who, late last year said VW would commit to spending $50 billion on battery cars alone by mid-decade. The automaker aims to become the world’s dominant player in electromobility in the coming decade and, on Monday, committed to investing $800 million to start producing two battery-cars at its Chattanooga assembly plant starting in 2023.

Ford has also been pushing into the electric car field but could use help from VW. Meanwhile, it has been seen as being one of the leaders in self-driving technology and will likely lead that joint effort.

“What we’re talking about today will be more of what you’ll see in the future,” said Ford CEO Hackett. “Redefining what is truly possible for mobility. You can’t do this alone … in these changing times.”

Ford and Volkswagen aren’t the only ones who are exploring the need to collaborate. One of the biggest alliances pairs Nissan and Renault, while Honda and General Motors have, during the last several years, launched collaborative projects covering batteries, fuel cells and autonomous vehicles. Toyota, at this week’s North American International Auto Show, introduced the new Supra, the sports car emerging from a joint venture with BMW which is marketing its own version as the new Z4 roadster.

One of the questions repeatedly raised during the Tuesday morning conference call with reporters and analysts was how the new collaboration between Ford and VW will affect manufacturing operations and jobs. The U.S. automaker’s global chief Jim Farley stressed that there should be no loss of jobs. But VW’s Diess noted that many details have to be worked out and that could eventually impact who produces what and where.

For his part, Hackett noted that the financial benefits of the alliance likely won’t be felt any earlier than 2023, with Diess adding that a key goal is to not just cut costs on existing operations but “mitigate” what each automaker might have otherwise had to spend on the development of new technologies.

Separately, Farley emphasized that Ford will continue to move forward with a global restructuring just getting underway. It is expected to impact overseas key markets, such as Europe, more than the United States, and will likely result in thousands of job cuts.

“There are parts (of the world) that are underperforming, and we will deal with that,” Farley said.