Maybe it could pull the Queen Mary. 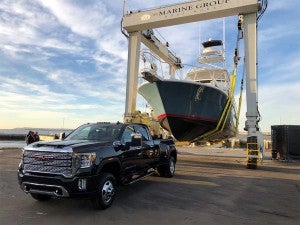 The Sierra HD 3500 makes an audacious debut pulling 225,000 pounds of yacht and trailer.

It wasn’t quite the Queen Mary, but watching a pickup pull 225,000 pounds worth of yacht and boat lift will clearly get your attention – as it did Tuesday evening when GMC unveiled several versions of its 2020 Sierra Heavy Duty models at a San Diego news event.

“For customers who demand a premium, innovative heavy-duty truck that supports their passions, the next-generation Sierra HD can pull like a pro,” proclaimed GMC Vice President Duncan Aldred following a demonstration that made his words sound a little less like hyperbole.

The HD builds on the “base” Sierra pickup launched by the GMC brand for 2019, the light-duty 1500 version one of the finalists for North American truck of the year. In heavy-duty trim, buyers will have a variety of options, including the off-road-oriented AT4, the plush Denali and the stump-pulling HD 3500 that managed to pull yacht and lift with only a minor modification to its optional fifth-wheel hitch.

The truck brand among General Motors’ four North American marques, boasts that the new HD line is “bigger, stronger, smarter” than the heavy-duty trucks it replaces. While not all of the details have been released, they suggest the truck can live up to its claims. 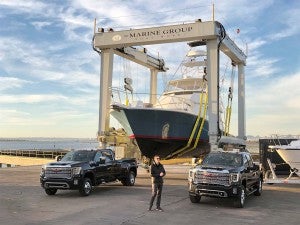 The new trucks are slightly longer and taller than the outgoing models and feature a massive new grille. They also offer, GMC says, more interior space, both front and back. In terms of power, they will ultimately offer a pair of options, including a gasoline drivetrain. But, considering that 90% of current HD buyers opt for an oi-burner, the initial debut event focused on that package. The 6.6 liter Duramax Diesel makes 445 horsepower and 910 pound-feet of torque, pushing it through a customized, all-new Allison 10-speed gearbox to all four wheels.

While not the biggest numbers in the segment, they do translate into a figure that counts, Aldred claiming the Sierra HD 2500 will be able to tow “in excess of 30,000 pounds.”

“Our absolute, number one priority was towing,” said Jaclyn McQuaid, the chief engineer for the new HD family.

To ease the process of hauling a trailer, the HD models get trailer sway control, auto grade braking and other features. There’s also Hill Climb and Hill Descent modes, particularly useful on the AT4.

The Sierra HD 3500’s numbers weren’t released but run even beyond the towing capacity of the 2500, added Aldred, calling it “the ultimate trailering machine.” 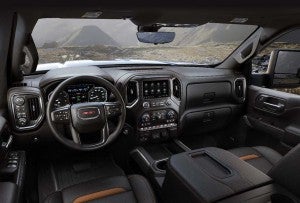 In Denali trim, the interior of the Sierra HD starts to resemble that of a luxury sedan.

(Who took honors as North American Truck of the Year? Click Here to find out.)

To help justify that label, GMC has given the new HD models brains, as well as brawn. The new models are available with an array of features, such as a 15-inch head-up display and a camera system that can operated in 15 different modes. That includes several forward view angles that are particularly useful when driving the off-road AT4 edition on tight, narrow trails or climbing rocks. For towing, there’s an invisible trailer mode that makes it seem as if you can see right through the trailer. The HD models also offer the camera mirror system first seen on the Cadillac CT6 sedan a few years back.

There’s also an updated navigation and infotainent system available. Surprisingly, one feature not currently available on the HD line – or even the standard Sierra 1500 – is active cruise control. That radar-guided technology will show up on the light-duty package in 2020, according to a GMC official, but there’s no timetable for adding it to the HD line, according to McQuaid. 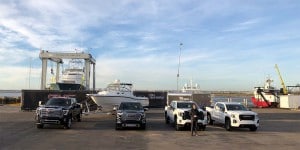 Not all the new features require microprocessing power. One of the features carried over from the latest-generation GMC Sierra 1500 is the six-function tailgate that makes it easier to carry large loads and to climb in and out of the bed. The carbon fiber bed introduced on the light-duty model won’t be available for HD buyers, however, at least not initially.

While the Sierra HD is clearly a work truck, it has a strong following among personal use buyers. And even with commercial customers, there’s strong demand for luxury features – witness the fact that 90% of current buyers opt for the more expensive Denali grade.

The automaker says it will offer more specific details on the new 2020 GMC Sierra HD models, including specs on the gas version, in a few weeks.