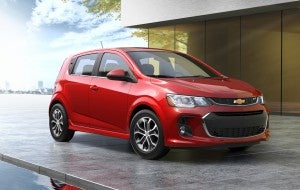 The Chevy Sonic is limping along and appears ripe to be discontinued by GM.

In the northern Detroit suburb of Orion Township, one of General Motors’ assembly plants is hanging on by a thread. The factory is barely running on one shift and, were it not for the Chevrolet Bolt EV, might have been a fourth plant on the list of assembly lines GM said it would shut down last November.

The automaker has actually increased production of the all-electric Bolt in recent months, but demand for the Chevrolet Sonic, the other model rolling off the line there has dropped to less than 2,000 a month, barely enough to bother, it seems.

TheDetroitBureau.com first warned that the subcompact Sonic was on the endangered list in April 2017 and now, it seems, its fate may be sealed. The Wall Street Journal is reporting Sonic’s days are numbered, though a spokesperson for Chevy says that, at least for now, there is nothing formal to be announced.

Chevy had high hopes for the Sonic when it launched the small car in 2012 as a replacement for the old Aveo. It was one of several small models, along with the even more Lilliputian Chevrolet Spark, targeted at buyers on a budget and struggling with gas prices that had surged as high as $4 a gallon. To justify building the two models in the States, rather than Korea or Europe, GM had asked for and received concessions from the United Auto Workers Union that added up to hundreds, even thousands of dollars a vehicle. That was major news on products with only the slimmest of profit margins. 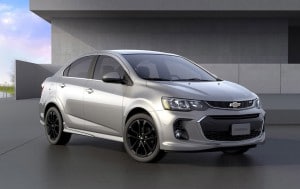 The Sonic sedan in a sporty RS trim level as well, including blacked out wheels, wasn't enough to jumpstart sales.

Initially, the Sonic seemed to fare reasonably well, by 2014 sales peaking at just over 93,000. Last year, however, they barely topped 20,000, And with the economy reasonably strong, while gas prices are hovering just below $2 a gallon in much of the country, Sonic has become little more than an afterthought for buyers – especially with reasonably affordable alternative in the crossover category, such as the Chevrolet Trax.

The only reason Chevy didn’t kill off the Sonic earlier, according to one well-placed source who spoke to TheDetroitBureau.com, is that it could fill in the gaps on the line between Chevrolet Bolt EVs. But with sales of the electric vehicle gaining momentum it’s become less and less necessary to keep the Sonic rolling at the Orion plant, too.

Were it not for the importance of the Bolt as Chevrolet’s first all-electric model, the bowtie brand might simply abandon it, too, shuttering the suburban plant, as well.

GM already is set to close three assembly plants – one in Detroit, one in Lordstown, Ohio, and a third in Oshawa, Ontario – as well as two component plants. All told, more than 14,000 workers will be impacted by those closings, as well as a cutback of white-collar staff.

Six passenger car models will drive off into the sunset, meanwhile, including three other Chevy products: the compact Cruze, the Volt plug-in hybrid and the full-size Impala sedan. Add to the list Cadillac’s CT6 and XTS sedans, and the midsize Buick LaCrosse.

At least a few more GM plants are considered at risk, according to industry analysts, including one near Michigan’s capital city Lansing, one in Bowling Green, Kentucky, and another in Fairfax, Kansas.

Officially, GM has only said that it has “unallocated” product that had been built in the Detroit-Hamtramck, Oshawa and Lordstown factories. Technically, that means they could stay open if new products move in to replace vehicles, like the Cruze, that are being dropped. That will be one of the key demands from the UAW when it begins negotiating a new, four-year contract with GM next summer.

GM CEO Mary Barra earlier this week indicated new products are coming – including an all-electric Cadillac that brand teased during a preview ahead of the North American International Auto Show’s opening.

But Barra quickly dashed hopes that those upcoming products could save the three plants closing this year. “We need to make sure that we keep the capacity utilization up at other plants that we’re still working to improve,” Barra said, referring to the Lansing, Bowling Green and Fairfax facilities.