Tesla’s Newest Easter Egg is a Gas … or Gaseous Anyway

If you’ve ever been in a car on a trip when a smell invades the cabin of your vehicle, then good news: Elon Musk and Tesla have the audio to pair with your olfactory experience: a fart app.

Musk confirmed the company was working on it in a tweet: “Tesla (fart emoji) app almost done. Important to get every note right!” The fart app can be found in the Easter egg drawer of Tesla models that have received the most recent software update.

To be clear, it’s not a euphemism for something else, instead, yes, it sounds like someone in the car – or the car itself – is passing gas.

Even better, owners can choose from a variety of farting sounds and when and how they are triggered. For example, instead of that familiar clicking noise one hears when using the turn signal, can now be fart sounds.

(Could a pickup truck be Tesla’s next vehicle? Click Here for the story.)

Yes. Sounds. A quick check of the app reveals a variety of options for gaseous emanations, a few of which reference things in Tesla and Musk’s history, including:

There is another called “I’m so random.” It appears to be what it suggests, drive along and a radom fart will occur. No company reference to recall.

The same software update also has a “fireplace” Easter egg that changes the center screen into a fireplace, turn the heat up, and blast some romantic music, according to Electrek.com. 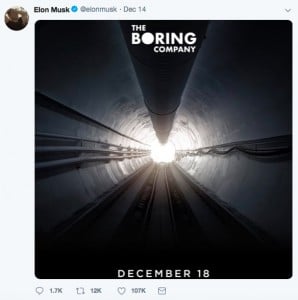 Additionally, the company appears to be on-track for the public viewing of its first high-speed test tunnel in Hawthorne, California, where SpaceX’s headquarters is located. The first test was supposed to take place on Dec. 10, but was delayed without any real explanation.

However, on Dec. 14, Musk tweeted out a picture of a tunnel opening with the date “December 18” on it so it would seem that plans are still on for folks to come out and get a test ride in the company’s first 150-mph car transport tunnel.

(Tesla hustling to build new plant in China. Click Here for the story.)

The company has agreements in place with the city of Los Angeles and Chicago to build tunnels, according to Musk.