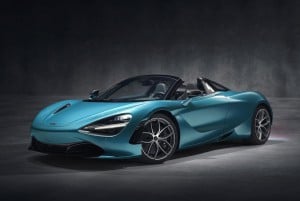 The new McLaren 720S Spider is the latest creation born from the company's $1.6 billion Track25 plan.

British supercar maker McLaren Automotive keeps rolling out new models, extending its comeback from the brink of death. The latest is the 720S Spider, which is part of its Super Series product line.

The comeback is part of the nearly $1.6 billion Track25 business plan that was the latest effort to revive the iconic sports car company, and the only one that seems to have taken. The new 720S Spider is available right now.

“As the most accomplished convertible supercar ever, the new Spider delivers across a remarkable spectrum of abilities to outstandingly high levels, and as lightest in class with an increase of just 49kg over the 720S Coupé, moves us even further ahead of our competition in the weight race.”

(McLaren planning 18 “new models and derivatives” by 2025. Click Here for the story.)

The new convertible’s design naturally borrows heavily from the 720S coupe that was introduced in 2017. According to the company to goal is to “maximize downforce, minimize drag, enhance powertrain cooling and optimize aerodynamic performance. 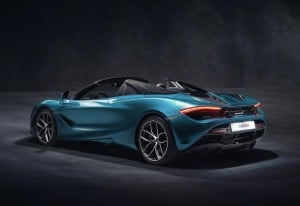 In short, make it sleek and sticky so it can go fast — even with the top down. Speaking of that, the new, electrically actuated Retractable Hard Top is integrated into the exterior design. The new top, which is just one piece, reflects McLaren’s dedication to superior design. The new roof is so good, the company received a patent for its design.

If the exterior – and all the carbon fiber the car is laden with – is supposed to help it go fast, the powerplant must be a beast, and it is.

The convertible shares the coupe’s 4.0-liter twin-turbocharged McLaren V8 engine. The mid-mounted motor improves handling while putting out 710 horsepower and 568 pound-feet of torque. All that horsepower translates to a 0-62 mph of just 2.9 seconds and 0-124 mph takes just 7.9 seconds – just 0.1 seconds off the pace of the coupe.

(Click Here for more about McLaren filling in holes on new Longtail’s story at Goodwood.)

It takes just 10.4 seconds for it cover the quarter mile. With the roof up, it matches the coupe’s top speed of 212 mph. Want to go fast with the roof down? No problem. Top speed there is drops only slightly to 202 mph. 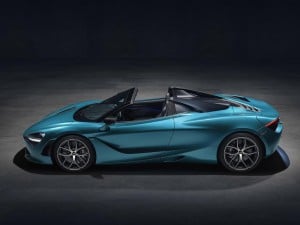 The Spider’s exterior design is focused on simply making it more efficient and better handling. The dramatic “eye sockets” on the front fenders as well as the double-skinned dihedral doors are just some elements of that design. Add in a front splitter, contoured hood and active rear spoiler, and what you have a full-blown performance machine.

Additionally, owners can purchase a glazed transparent carbon fiber retractable roof, giving occupants the open-air feel, but also allowing the driver to maximize the vehicle’s performance. The “glass” is electrochromic so it can be clear or tinted with a simple button press.

What’s a supercar these days with a staid and boring interior? A non-seller, and McLaren’s resolved that problem by using same welcoming and luxurious supercar cabin enjoyed by 720S Coupé drivers.  A centrally mounted 8-inch high-resolution Central Infotainment Screen remains the primary hub for the vehicle’s functions: audio, media, navigation, climate control and other convenience features, with all the key applications shown on a vertical carousel as well as being available via quick-access ‘hard’ keys below the screen.

(To see more about how McLaren reached into its past for its new 600LT, Click Here.)

The dual-zone climate control and air conditioning system has been recalibrated for the 720S Spider and is able to detect if the RHT position changes from raised to lowered or vice versa.  The temperature and airflow is automatically adjusted, warming or cooling occupants according to the ambient settings already selected by increasing airflow into the cabin and moving more air to the footwell or upper cabin areas. All of this can be yours for just under $300,000.