More of the top two awards handed out for 2019. 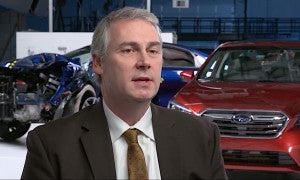 New vehicles continue to get safer and safer – a point many makers advertise – and this year’s Insurance Institute for Highway Safety awarded its highest rating – one of those advertised – to 30 new vehicles for 2019, falling short of last year’s total of 34.

The biggest reason for the improvement for some brands wasn’t necessarily new crash avoidance technology, but instead improvement of a long-used feature: headlights.

“The 30 first-tier “plus” award winners earn the highest rating for passenger-side protection in a small overlap front crash and have good-rated available headlights,” the organization noted in a release.

Overall, 57 vehicles earned the institute’s two highest ratings: 2019 Top Safety Pick+ or Top Safety Pick, which surpassed last year’s mark. This is in spite of the fact the organization continues to raise the bar to get the rating, upping the criteria needed to gain the top rankings.

(Americans driving with insufficient headlights. Click Here for the story.)

“We challenged manufacturers to provide the best possible protection in a range of crash scenarios and equip vehicles with an automatic emergency braking system to avoid crashes, as well as offer headlights that give drivers confidence when traveling at night,” says IIHS-HLDI President David Harkey. 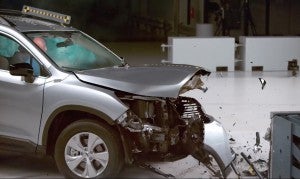 “Fifteen brands hit all the marks to give consumers shopping for a new car a wide variety of 2019 models to consider.”

Not surprisingly, perennial favorites reached for the stars again this year and managed to hit the mark in several categories. The Subaru led this year with seven 2019 Top Safety Pick+ winners. They are the Ascent, Crosstrek, Impreza sedan and wagon, Legacy, Outback and WRX. The Forester falls shy of the top award because its headlights rate acceptable, but the small SUV qualifies for Top Safety Pick.

(Click Here to see how highway fatalities could again top 40k this year.) 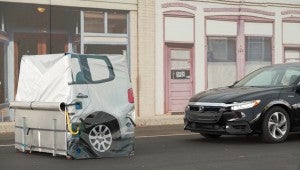 More vehicles performed well on the collision avoidance test than in the past.

Besides the Forester, 17 other vehicles just missed achieving the top award because of acceptable-rated headlights, including the Honda Accord, Mitsubishi Outlander, Nissan Altima and Toyota Corolla are among this group. The group added the headlight test in 2016.

“Several automakers still need to bring their vehicles up to speed when it comes to offering advanced levels of safety and headlights that provide good visibility,” Harkey said.

(To see why IIHS claims advanced driver assistance systems could cause, not prevent collisions, Click Here.)

Absent from the winner’s circle are Fiat Chrysler’s Dodge, Jeep and Ram brands; Ford and its Lincoln brand; General Motors’ Buick, Cadillac, Chevrolet and GMC brands; and Tesla. All failed to qualify for either award. Volvo hasn’t yet qualified for a 2019 award due to missing passenger-side small overlap front test results. The results can change as automakers make adjustment to their vehicles during a model year.