EV range of 17 miles per charge. 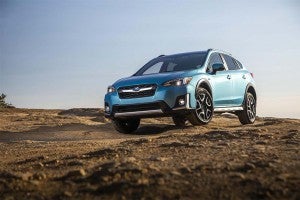 Subaru's first plug-in hybrid, the Crosstrek PHEV, will make its debut next week.

Subaru is about to become the latest automaker to plug-in to battery power – quite literally, with its first-ever plug-in hybrid set to make its debut at the Los Angeles Auto Show next week.

The Japanese carmaker will underplay the plug-in side of the drivetrain by calling its new model the Subaru Crosstrek Hybrid – apparently lifting a page from Fiat Chrysler’s playbook, the Detroit automaker calling its own plug-in the Pacifica Hybrid.

That said, the new version of the Subaru SUV will have the ability to travel about 17 miles in pure battery mode. That’s relatively modest compared to some current plug-in offerings, such as the Chevrolet Volt which gets three times the range, but it’s about what Toyota manages with its latest PHEV, the Prius Prime.

(Why did Subaru earnings take a tumble? Click Here to find out.)

Proponents see plug-ins as a viable alternative to both conventional gas and pure battery-electric offerings since they can run in battery mode for about the length of a typical American commute, then switch to gas power when a motorist has to keep going. 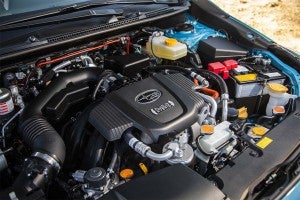 With only an 8.8 kWh battery, the Crosstrek Hybrid will manage just 17 miles of EV range.

Subaru decided to skip the Toyota approach and not go with a distinctively designed, battery-only model. The 2019 Subaru Crosstrek Hybrid will look a lot like a conventional version of the crossover, but does get some distinctive exterior and interior styling tweaks, as well as some unique cabin technology.

Outside, there are new “Plug-In Hybrid badges, as well as embossed “Plug-In” text on the charge door. The PHEV version also gets unique 18-inch wheels and the roof rails and rear spoiler are painted black. The plug-in also gets silver strips on the grille and foglight surrounds, as well as a silver chin spoiler.

The cabin is done up in high-contrast gray and navy, with leather seats, and unique blue stitching.

Like a number of other plug-based models, Subaru will Crosstrek Hybrid owners to operate a number of functions remotely using a smartphone. That includes pre-conditioning the vehicle when it’s plugged into the charger. By using line current to heat or cool the cabin, as needed, full battery power will remain once the car is on the road. Subaru will also give buyers a complementary 10-year subscription to its StarLink Safety and Security Plus service, including automatic collision notification. 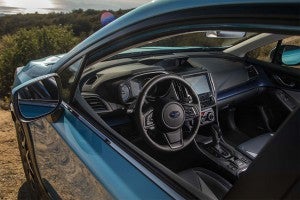 The Hybrid is based on the Crosstrek 2.0i Limited model but, at a base $35,970, it’s nearly $8,000 more expensive, which may raise some buyer concerns considering the relatively limited range of the battery system. Buyers will also wind up with a smaller gas tank is 3.4 gallons smaller than the Limited’s, and towing capacity drops by half, to just 500 pounds.

The powertrain of the Crosstrek Hybrid starts out with the same, 2.0-liter boxer-style four, here derated to 137 horsepower and 134 pound-feet of torque. The added power from the system’s two electric motors brings that up to 148 hp, four short of what the Limited makes. The basic hybrid side of the system is derived from Toyota technology and it is powered by an 8.8-kilowatt-hour lithium-ion battery.

Final EPA numbers haven’t been released, but the Subaru Crosstrek Hybrid is expected to yield 90 MPGe and, once the battery is depleted, 35 miles per gallon Combined. Subaru says the plug-ins relatively small battery can be fully charged in two hours from a 240-volt charger, and five hours using standard household 120-volt current.

(Subaru ascending toward another annual sales record. Click Here for the story.)