Nissan Profits Fall 8% in First Half of Fiscal Year 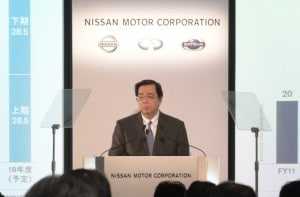 Nissan Motor Co. reported an 8% drop in quarterly profits due to declining sales in its biggest markets, North America and Europe, as well as hits on raw material costs.

However, this dip in profits wasn’t enough for Nissan to revise its forecast for the fiscal year through March for a 500 billion yen, or $4.4 billion, profit on 12 trillion yen, or $106 billion, sales.

Hiroshi Karube, Nissan’s chief financial officer, said the automaker’s quarterly vehicle sales fell in North America and Europe, rose in China, and were steady in Japan, compared with last year results, according to the Associated Press.

He told reporters Nissan was pushing to return to profitability in North America, and that the rising cost of raw materials pinched earnings, adding that steel and aluminum tariffs and other raw materials announced by President Donald Trump negatively impacted the company’s bottom line last quarter, but only marginally when it came to rising material costs.

Also hurting Nissan’s bottom line were unfavorable currency exchange rates in emerging markets. Additionallly, the company’s cost-cutting efforts were going well, but research spending was on the rise, it said.

Karube was asked repeatedly about his views on the U.S. midterm elections and what that meant for trade and other policies affecting Nissan, but he acknowledged he had no idea.

“It just happened yesterday, and it is today,” he said. “It is still unclear how the situation may change.”