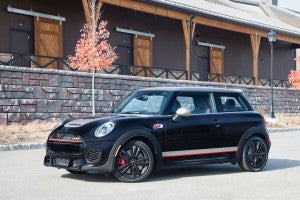 With the recent focus on “hot hatches,” it would be fair to assume that ever-popular Mini would be among the leaders in the segment. Not only is it fair, but also it’s correct with the brand’s John Cooper Works edition vehicles.

At this year’s Los Angeles International Auto Show next week, Mini’s going to roll out a series of new vehicles looking to generate some excitement, especially within the “need for speed” crowd.

The Knights Edition is based on a Mini John Cooper Works Hardtop with black and silver factory components and aftersales accessories — think of it as the Oakland Raiders designed a Mini. It is available exclusively with a Midnight Black exterior paint, a Melting Silver roof and mirror caps, as well as a custom melting silver bonnet stripe and melting silver and red side stripes design, according to Mini. 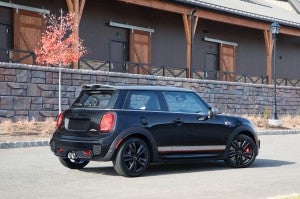 The black-and-silver with red trim fives the Knights edition new Mini will be available in Q1 2019.

In addition to those two offerings, Mini is showcasing four special edition models – the Countryman Yin Yang Edition, the Clubman Starlight Edition, S E Countryman PHEV special edition and the John Cooper Works International Orange Edition – that feature the brand’s focus on the ability to customize these vehicles to their owners’ tastes.

Mini USA plans to expand on that at the L.A. Auto Show when it unveils a slew of customized accessories. Not only can owners select the parts for their vehicles, but using an online configurator they can see what the new vehicle will look like with the new accessories applied. With MINI Yours Customized, the brand is taking individualization to a new level, using innovative 3D printing and laser lettering in production for the first time.

(Click Here for more about making your Mini your own with new personalization program.)

“Individualization and customization are core elements of the MINI brand,” said Thomas Felbermair, pice president, Mini Region Americas. “This not only includes a range of options and accessories available for our cars, but also a unique range of limited production special editions that have long-been part of the MINI DNA since the first generation Mini was produced in 1959.”