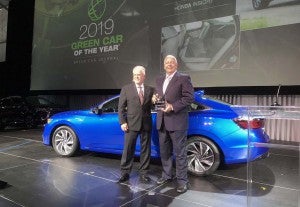 The 2019 Honda Insight was named the Green Car of the Year on Thursday, during a news conference at the Los Angeles Auto Show.

The award comes as something of a vindication for Honda. The automaker was actually the first to sell a hybrid in the U.S. market, but the original, two-seat Insight, launched in 1999, was a slow seller and a second version bearing the Insight badge didn’t do much better. The new model finally appears to be connecting with consumers by “being a no-compromise vehicle,” Ray Mikichuk, Honda’s assistant vice president for U.S. sales, told TheDetroitBureau.com.

(Live from LA! Click Here for complete coverage of the 2018 LA Auto Show.)

“Honda has had a long history of electrification,” Mikichuk added. “We’ve come a long way from that (original Insight.” 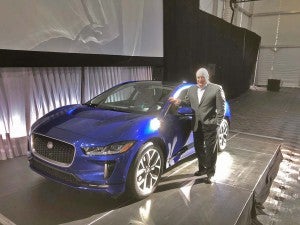 Jaguar's Joe Eberhardt with the I-Pace and the Luxury Green Car of the Year trophy.

While Honda went for a relatively conventional design approach, Jaguar chose a more radical look that takes advantage of using a skateboard-like platform for the new I-Pace battery-electric vehicle. With the motors, batteries and most electronics under the load floor, I-Pace can deliver a large interior in a small footprint.

“This clean sheet approach is why you see this dramatic and environmentally combination of luxury and performance,” said Joe Eberhardt, head of North American operations for Jaguar Land Rover.

For his part, Ron Cogan, the publisher of Green Car Journal, which sponsors the annual awards, stressed that electrification is particularly “rational for luxury vehicles…where buyers are less focused on price.”

It’s also the reason the sponsors of the award don’t limit their selections to just battery-based products, but also consider models using advanced forms of gas and diesel technology. Among the contenders for the 2018 Green Car of the Year were the Volkswagen Jetta which manages 40 mpg from its gas engine, Also on the finalist list: the new Nissan Maxima which introduces the new VC-Turbo engine. By constantly altering its compression ratio, that breakthrough technology can deliver hybrid-level mileage and V-6 performance, Cogan said. 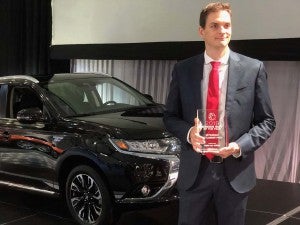 Nate Berg with the Mitsubishi Outlander PHEV and the SUV Green Car of the Year trophy.

The winner of the SUV Green Car of the Year manages to operate in a wide range of modes, including both parallel and serial hybrid, plug-in electric, all-electric and all-gas. And Mitsubishi is hoping the Outlander PHEV will help it gain some traction in the U.S. market after years of decline.

The new model, said product planning chief Nate Berg, “shows our dedication to electrification and will accelerate in the future.”

While sales are still modest, the L.A. Auto Show brings a flood of new green cars to market, ranging from mainstream to luxury. There’s also a big push for environmentally friendly performance with models like the Audi e-tron GT. That battery concept car – set to go into production in 2020 – will get about 250 miles per charge while still launching from 0 to 60 in a mere 3.5 seconds.