GM Selling Off Hotel Property to Raise Cash, Get Lean

Moody's gives thumbs up to the plan. 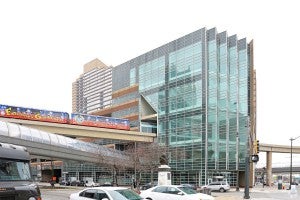 GM is looking to sell the hotel it owns in the Millender Center for $45 million.

In another step aimed at disposing of unneeded assets and raising cash, General Motors has confirmed it plans to sell off a hotel located directly across the street from its world headquarters in Detroit, which is now the midst of a real-estate boom.

The automaker said it intends to sell the 265-room Courtyard Marriott hotel that was built in 1985 as part of the mixed-use Millender Center complex on Jefferson Avenue and is linked to General Motors Riverfront headquarters in downtown Detroit by a covered footbridge.

GM acquired the property years ago when Detroit was in the economic doldrums. However, downtown has undergone a major revival the past five years and the value of real estate has risen sharply, making it a propitious time to sell, GM said.

“With the ongoing development of downtown, especially in the hotel and restaurant markets, GM has put this property on the market,” the company said in a statement this week. The asking price is $45 million, according to Crain’s Detroit Business.

GM announced earlier this week that it planned to eliminate 15,000 jobs and idle seven manufacturing plants around the world, including five in North America, as a part of a broad restructuring of business operations.

Plants on the list include assembly plants include the “Poletown” plant in Detroit, a massive complex in Oshawa, Ontario, and the Lordstown, Ohio site. Production at all three plants, which are dedicated to making passenger cars, has dropped significantly during the past two years.

Meanwhile, GM’s cost-cutting, which has come under intense criticism from President Donald Trump, has been blessed by a key independent observer.

Moody’s, the credit rating service, said the cost-cutting initiatives announced by General Motors are credit-positive and consistent with the company’s strategy of remaining highly disciplined in allocating capital and maintaining operational competitiveness.

“We view the company’s cost reduction plan as an undertaking to maintain its current strengths, and to improve its ability to remain at the forefront of the auto industry’s movement toward electrification, autonomous driving, ride hailing, and connectivity​​,” according to Bruce Clark, Moody’s senior vice president and lead auto analyst.