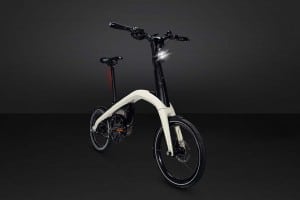 One of General Motors' two electric bikes is a distinctively styled compact version.

The word, “mobility” is showing up in transportation circles a lot these days, and expectations are that the public will have plenty of alternative ways to get around in the years ahead, everything from electric scooters to ride-sharing services.

That’s led General Motors to invest billions in a variety of different transportation alternatives, including car-sharing service Maven and it autonomous Cruise Automation subsidiary. Now, the Detroit automaker says, it will be getting into the bicycle business. Make that electric bikes, two of which it unveiled on Friday.

It wants to start selling them next year but it has a rather significant problem: no name. So, it is asking the public to come up with a moniker for the new brand and will give the participant who submits the winning choice $10,000, with nine runners-up getting $1,000 each.

“As an avid cyclist and urban commuter, I know how great it feels to get where I’m going easily and to show up sweat-free,” said Hannah Parish, director of General Motors Urban Mobility Solutions. “We blended electrification engineering know-how, design talents and automotive-grade testing with great minds from the bike industry to create our eBikes. Now we want to expand our thinking beyond the company walls and hear from people who like to move and have rad 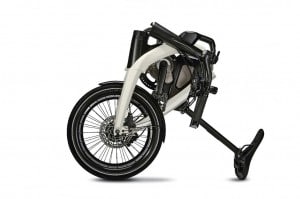 GM's second eBike can be folded up small enough to fit into a compact car.

GM hasn’t released specific pricing or other details about the new eBikes, other than noting one is compact, the other foldable.

The company joins a surprisingly long list of carmakers that have, over the years, built bikes of one form or another. Indeed, the brothers Peugeot started building bicycles years before they got into the car business. Opel, the German car brand GM sold last year to Peugeot parent PSA, started out making a variety of different goods, including sewing machines and the high-wheeled bikes today referred to as “penny-farthings.”

In more recent times, a number of other car companies have launched side operations building bicycles, including Honda and BMW. In some cases, those bikes can cost as much as a new car. The Specialized S-Works McLaren Tarmac race bike will set you back $20,000. The BMC Lamborghini Limited Edition Road Bike pushes into even more rarified territory, at $32,000 a pop. And the Aston Martin One-77 Bike, named after an exotic, limited-edition hypercar, went for a mind-boggling $40,000.

Those all were pedal-powered and featured extensive use of exotic materials like carbon fiber.

But there’s also been a push into the eBike market, with automotive entrants including Volkswagen, Smart, the sibling of Mercedes-Benz, as well as BMW. 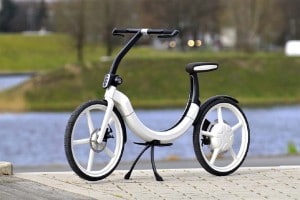 A number of other carmakers have -- or now do -- build bicycles. This is a VW eBike.

Why an eBike? Consider that data service Statista expects global sales of eBikes to push close to 35 million annual. Millions are already being sold, with a heavy concentration in Asia, notably China, where GM is the second-largest automotive manufacturer.

(Uber gets into the eBike business. Click Here for more.)

One of the questions the Detroit automaker hasn’t answered is whether it might use its new eBikes as part of a ride-sharing service or if they will strictly marketed to retail buyers.

Significantly, rival Ford is running the sharing service GoBike, based in San Francisco, while new mobility giant Uber recently acquired its own eBike subsidiary, Jump. Its own nemesis, Lyft has operations in several cities, including New York, where it is part of the Citi-branded bike-sharing program.

If you’d like to land a cool $10,000 and think you have the perfect name for GM’s new eBikes, visit www.eBikeBrandChallenge.com and submit your entry before 10 AM EST on November 26.

(Pedestrian and bicycle deaths have been rising fast. Click Here to find out why.)