Carlos Ghosn was formally ousted as Nissan Chairman by the automaker's board on Thursday.

With relatively little debate, Nissan’s board voted to oust Chairman Carlos Ghosn on a Thursday afternoon emergency meeting at its headquarters in Yokohama, the latest move in a scandal that could see the man credited with saving the company remain in Japanese police custody for another week or more.

The 64-year-old Ghosn, who helped save the Japanese automaker in 1999 after it received a massive capital infusion from French carmaker Renault SA, was arrested on Monday upon returning to Japan and accused of both under-reporting his income by as much as $45 million, while also misusing company assets. Japanese media on Wednesday reported the Brazilian-born executive would remain in detention in Tokyo until prosecutors decide whether to bring a formal indictment.

The arrest follows what Nissan CEO Hirota Saikawa described as a months-long investigation triggered by a “whistleblower.” But there are some questioning exactly what the case really involves, with the board of Nissan’s French alliance partner Renault SA notably choosing not to oust Ghosn as its own CEO while waiting for clear evidence. Several sources NBCNews.com spoke to went further, questioning why Ghosn was even arrested.

This may involve a “lethal brew of politics and international business intrigue,” said Joe Phillippi, a long-time Wall Street automotive analyst and now head of AutoTrends Consulting. While he cautioned that it might be “a stretch,” he quickly added that it is “not out of the realm of possibility” that the accusations leveled against Ghosn were motivated by an internal corporate dispute. 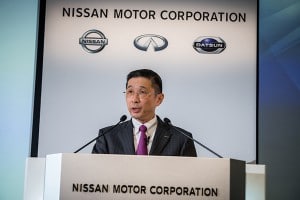 Nissan President and CEO Hiroto Saikawa has been pushing for more independence from Renault.

(Ghosn could be detained up to 10 days without charges. Click Here for more.)

That was echoed in a half-dozen other conversations with those inside or close to Nissan, sources echoing the fact that there had been a sharp falling out between Ghosn and Saikawa, the man who replaced the Brazilian-born executive as Nissan CEO last year.

“Companies typically may give you a slap on the hand” when you play a little loose with the use of things like a corporate jet or charge things to your expense account that aren’t justified, said one Nissan veteran, “but they don’t have their chairman arrested and put him in jail.”

“If the charges wind up being rather minor they may appear to have blown this out of proportion,” said a source, and could come back to bite Saikawa hard. If the case is not rock-solid, in fact, some forecast Saikawa could wind up being forced out himself.

The Nissan CEO seemed clearly confidant in the charges levelled against Ghosn during a news conference at corporate headquarters on Monday, declaring, “Beyond being sorry I feel great disappointment, frustration, despair, indignation and resentment.” But he also may have signaled a personal element to the case by suggesting that Ghosn had gained too much power and may have stayed in his position too long. 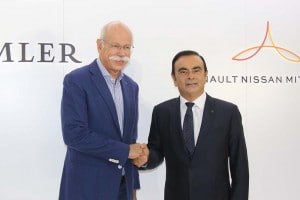 The crisis could fracture the relationship the R-N-M Alliance has developed with Daimler, its CEO Dieter Zetsche shown here with Ghosn last month.

The executive joined Renault in 1996, brought on board to fix the French companies finances. He put it in the black in barely a year, earning the nickname, “Le Cost Killer.” Ghosn was then sent to Japan in 1999, after Renault purchased a 38.6% stake in Nissan, to implement a massive turnaround plan. Initially named chief operating officer, Ghosn was soon elevated to CEO after the Japanese carmaker began turning a profit and had slashed its crippling debt. He was subsequently named chief executive at Renault, and held the same position at the umbrella organization now known as the Renault-Nissan-Mitsubishi Alliance.

In his various posts, Ghosn not only had to deal with running a far-flung business empire but also with the political pressures associated with the Franco-Japanese group.

In 2017, the French government trimmed back its holdings in Renault – partly due to maneuvering by Ghosn – to 15 percent. But it still holds significant sway and has been pressing to further consolidate the Paris-based automaker and Nissan, something that French Finance Minister Bruno Le Maire emphasized during a radio interview on Wednesday.

If anything, Nissan has been pushing for a bit more independence under Saikawa. But Reuters quoted company sources as suggesting “There is a feeling of crisis at the (Japanese) Ministry of Economy, Trade and Industry that at this rate Nissan and Mitsubishi will be seized by the French government.”

(Renault and Alliance partners expand investments in France. Click Here for the story.)

Some observers warn things could go the other direction for the alliance if the French press too hard – or the Japanese maneuver too aggressively to prevent a takeover.

Earlier this week, Mitsubishi CEO Osamu Masuko said the very alliance that Ghosn strung together is in jeopardy. “I don’t think there is anyone else on Earth like Ghosn who could run Renault, Nissan and Mitsubishi,” he said.

Those on both the French and Japanese side of the Alliance have been trying to downplay such concerns, Saikawa expressing his desire to retain what has been a massively position relationship that last year saw the Alliance nudge past Volkswagen to become the world’ best-selling automotive group by unit volume.

While those on the Renault side continued to demand evidence of Ghosn’s alleged crimes, the company also issued a statement stressing its “dedication to the defense of Renault’s interest in the alliance.”

But there is no doubt that the loss of Ghosn will pose a major challenge. He is “the glue that holds Renault and Nissan together,” Max Warburton, a widely followed Bernstein analyst advised investors. “It is hard not to conclude that there may be a gulf opening up between Renault and Nissan.”

Should further questions be raised about the justification for Nissan’s charges and Ghosn’s arrest, several sources warned, the gulf could turn into an ocean. On the other hand, it could put a new, and unflattering spotlight on Saikawa himself.

(This story originally appeared on NBCNews.com.)