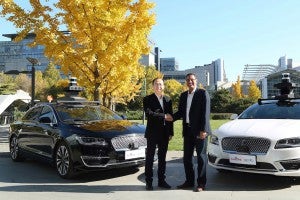 Ford Motor Co. just inked a deal with Baidu Inc. to conduct two years of autonomous vehicle testing on the roads of China as Waymo is getting approval to engage in its own self-driving vehicle tests in California despite the protests of watchdog groups.

The Baidu-Ford L4 Autonomous Vehicle Test Project is set to begin by the end of this year, the automaker noted. The project will develop and test autonomous vehicles that are designed to meet the Level 4 (L4) driving automation standard as defined by SAE International.

Level 4 vehicles are capable of operating autonomously within a specific geographic area and under certain weather conditions. Ford engineers have already started the process working at its Nanjing Research and Engineering Center, which was set up to convert the vehicles into Autonomous Vehicle Platforms in order to prepare them to be fit with Baidu’s Apollo Virtual Driver System.

All vehicles have now been equipped with the Virtual Driver System and related hardware and are ready for testing. The AV tests will be conducted on open roads in Beijing that are specially designated for AV testing, with the option of exploring further opportunities in other Chinese cities in the future in accordance with local regulations.

(Baidu partners with Continental, Bosch on autonomous tech. Click Here for the story.)

Conversely, Waymo’s been permitted to run is vehicles on all roads in Santa Clara Country. Waymo had been testing in Arizona, but shifted its program to California in the wake of Uber’s fatal crash in with a pedestrian near Phoenix. 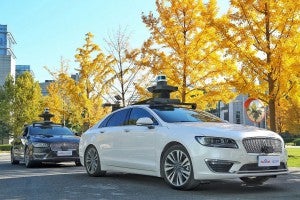 The Baidu-Ford L4 Autonomous Vehicle Test Project kicks off with on-road testing slated to begin by the end of this year.

“The DMV is letting Waymo turn all of us into human guinea pigs for testing their robot cars, without an adequate explanation of what’s going on,” said John M. Simpson, Consumer Watchdog’s Privacy and Technology Project Director.

In spite of certification, Consumer Watchdog, a group pushing for testing to be more controlled, isn’t certain Waymo is ready for testing on public roadways, objecting to the self-certification in the process. To get a driverless testing permit, a company must certify that has met a number of safety requirements.

“The problem with the process is that Waymo only had to certify it met the requirements,” said Simpson. “Worse, we don’t even know what Waymo said. Ronald Reagan used to say, ‘Trust, but verify.’ The DMV is simply trusting Waymo – without any real verification – and is putting our safety at risk.”

(Click Here for more about Baidu and NVIDIA team up services for autonomous vehicles.)

With the approval, Waymo will begin testing in several cities.The company says it will begin its testing in Los Altos, Los Altos Hills, Palo Alto, Sunnyvale and Mountain View, where Alphabet, Waymo’s parent company, is headquartered.

Ford and Baidu are encountering no such backlash for their testing in China.

“Working with a leading tech partner like Baidu allows us to leverage new opportunities in China to offer innovative solutions that improve safety, convenience and the overall mobility experience,” said Sherif Marakby, president and CEO of Ford Autonomous Vehicles LLC.

“This project marks a new milestone in the partnership between Ford and Baidu, and supports Ford’s vision to design smart vehicles that transform how we get around.”

The new project builds on the existing collaborative partnership between the two companies. Ford and Baidu have also previously agreed on and started to explore new opportunities for cooperation in areas of connectivity, artificial intelligence and digital marketing.