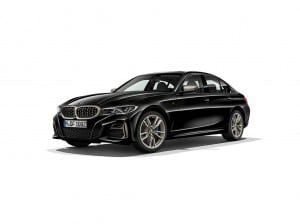 The rush is on. With just weeks to go before this year’s U.S. auto show season kicks off in Los Angeles, automakers are rushing to give us a preview of what they’ll have on hand in the City of Angels.

For BMW, the big news will be the debut of the 2020 M340i and M340i xDrive sedans, and the Bavarians have proffered up this first look at the range-topping model. While we’ll have to wait to get a look at the next-gen M3, these M Performance sedans are impressive in their own right, sharing an updated twin-scroll turbocharged 3.0-liter straight six making 382 horsepower and 369 pounded-feet of torque.

This marks the first time the 3-Series will be offered with an M Performance package, what some have dubbed M-Light. We’ll have to wait for the Los Angeles Auto Show to get all the specs on the 2020 BMW M340i models, but preliminary specs suggest 0 to 60 times of around 4.2 seconds, with top speed electronically limited at 155 mph.

On the 340i, power will be routed to the rear wheels, while the 340i xDrive has a performance-tuned all-wheel-drive system. Both cars will share an eight-speed Sport Steptronic transmission and feature, as 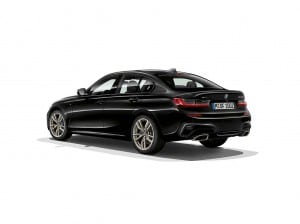 Both versions of the M340i will feature an M Performance limited-slip differential.

Visually, the M340i and its all-wheel-drive variant, the xDrive, won’t shock anyone who has already gotten a look at the seventh-generation BMW 3-Series, which made its debut at the recent Paris Motor Show. It has grown in almost every dimension, gaining 2.9 inches in length over the outgoing sedan, 0.6 inches in width and 0.5 inches om jeogjt, with a wheelbase that’s stretched 1.6 inches. But while the car’s track is also wider, front and back, the new suspension means ride height is 0.4 inches lower.

Among the new features on the 2020 BMW M340i and 340i xDrive are what the automaker calls “lift-related dampers” which it claims smooths out vibrations, especially on bumpy roads, improving the sedans’ sporty and well-planted handling. The rear dampers continuously adapt to driving situations. The front dampers operate in stages, going fully active under aggressive driving conditions. Buyers will also be able to op for the full Adaptive M suspension package.

The two sedans will allow drivers to switch between a variety of modes that automatically adjust steering boost, throttle response, shifts and suspension settings. In Sport and Sport+, meanwhile, the Driver Experience Control system amps up the M340’s already throaty engine note so that the twin-pipe exhaust “generates a particularly distinctive sound,” says BMW. 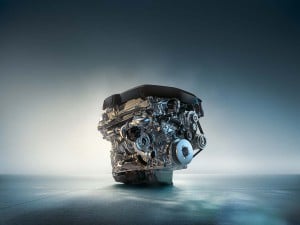 The updated twin-scroll turbocharged I-6 engine makes 382 hp and 369 lb-ft of torque.

Depending upon the configuration, meanwhile, the new model’s body sheds up to 121 pounds due to a focused effort on lightweighting the sedan.

Visually, there are a number of tweaks for the M Performance package, including larger front air intakes and, barely concealed by the 10-spoke wheels, bright blue M Performance sport brakes.

Inside, the M340i and M340i xDrive upgrade the new 3-Series cabin with features like supportive sport seats , an M leather steering wheel and an Anthracite roof liner. A standard-issue sunroof gives a more airy and open feel for passengers front and back. 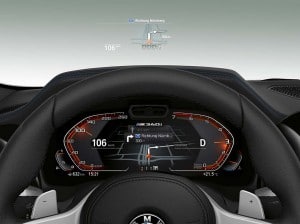 A closer look at the sedan's reconfigurable display.

The instrument cluster has been redesigned on all new 3-Series models, though the M340 pair get a specially modified reconfigurable sport display. As with new voice assistants, such as Apple’s Siri and Amazon’s Alexa, the new BMW Intelligent Personal Assistant lets a motorist use plain English to change the radio station or, for example, ask what the engine warning light means. There’s now a larger head-up display available.

The new M340i and M340i xDrive models also adopts a broad range of new safety and advanced driver assistance systems, or ADAS, which, the maker explains, are “designed to ease the driver’s workload in monotonous driving conditions – such as traffic jams – and lends a helping hand in awkward maneuvering situations.” The adaptive cruise control, for example, can come to a complete stop and then start up again at speeds up to 81 mph. Somewhat surprisingly, BMW has chosen to make now-commonplace systems like Blind Spot Detection optional on some new 3-Series trim levels at a time when such features are becoming standard on many mainstream products.

Pricing hasn’t yet been released on the new M models. That should be announced closer to the spring on-sale date.